Effect of Lead Exposure on Anaemia Among Children Attending the University of Ruhuna Teaching Hospital in Karapitiya, Sri Lanka: A Pilot Study 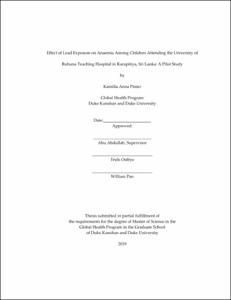 Background: There is limited recent data on anaemia in Sri Lanka, however previous estimates put prevalence at 25-35% in children under 5, approximately 16.3% among 5-9 year olds and 9.9-13.9% among 10-15 year olds. Iron deficiency is often cited as the most common cause of anaemia, however in Sri Lanka most anaemia cases are not iron deficiency anaemia related and alternative aetiology related to other causal factors such as heavy metals should be explored. Exposure to heavy metals has been linked with anaemia in other settings and it is plausible that it may contribute to anaemia in Sri Lanka. Aims & Methods: This study is a comparative cross-sectional study setting out to explore the relationship between exposure to lead and anaemia as well as the influence of other factors. Concentration of lead in hair samples and information regarding basic demographic characteristics was collected from children ages 2 to 14 with and without anaemia. Patients were randomly convenience sampled from the outpatient and inpatient paediatric clinics in Karapitiya teaching hospital. Results: The only predictor variables independently associated with having anaemia and lower haemoglobin were male gender and under 5 age. A logistic regression model with anaemia as the outcome found that females were significantly less likely to be anaemic (OR=0.122, p=0.0045) and overweight children were also significantly less likely to be anaemic (OR=0.777, p=0.032). A multivariable regression model assessing contributing factors including age, gender, ethnicity, body mass index (BMI) and stunting could only explain 18.44% of change in haemoglobin levels. Only female gender and age over 5 was significantly associated with higher haemoglobin levels (Coeff=0.932, p=0.015; Coeff=0.787, p=0.01). Tamil ethnicity in this model was associated with significantly lower haemoglobin levels (Coeff= -1.613, p=0.020). Conclusion: Haemoglobin levels, were expected to be negatively correlated with hair lead levels. However, due to the unforeseeable and persistent breakdown of the laboratory equipment the lead content of the collected and processed hair samples could not be analyzed by the thesis deadline. In order to enable and complete similar research in the future, strengthening of local laboratory capacity is suggested.