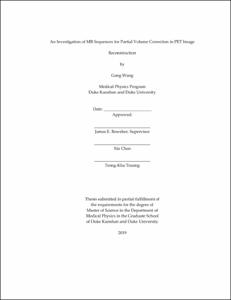 Brain Positron emission tomography (PET) has been widely employed for the clinic diagnosis of Alzheimer's disease (AD). Studies have shown that PET imaging is helpful in differentiating healthy elderly individuals, mild cognitive impairment (MCI) individuals, and AD individuals (Nordberg, Rinne, Kadir, & Långström, 2010). However, PET image quality and quantitative accuracy is degraded from partial volume effects (PVEs), which are due to the poor spatial resolution of PET. As a result, the compensation of PVEs in PET may be of great significance in the improvement of early diagnosis of AD. There are many different approaches available to address PVEs including region-based methods and voxel-based methods. In this study, a voxel-based PVE compensation technique using high-resolution anatomical images was investigated. The high-resolution anatomical images could be computed tomography (CT) or magnetic resonance imaging (MRI) images. Such methods have been proposed and investigated in many studies (Vunckx et al., 2012). However, relatively little research has been done on comparing the effects of different MRI images on voxel-based PVE correction methods. In this study, we compare the effect of 6 different MRI image protocols on PVE compensation in PET images. The MRI protocols compared in this study are T1-, T2-, proton-density (PD)-weighted and 3 different inversion recovery MRI protocols.