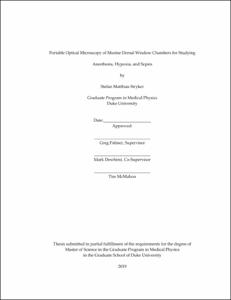 In vivo imaging is an important scientific tool for studying bio-molecular interactions, but lack of preserved functionality during imaging restricts scientists’ abilities to gain critical knowledge. Structure can be preserved while using high-resolution optical imaging by utilizing window chambers in murine models1, yet the use of anesthesia for immobilization is problematic. Anesthesia affects tissue oxygenation2, blood cell velocities3, immunosuppression4, and allowable duration of imaging5–thus its usage restricts in vivo bio-molecular imaging accuracy and duration.

Developing a portable imaging system that attaches to murine dorsal window chambers enables imaging without anesthesia, avoiding previous drawbacks of window chamber models. A raspberry pi camera (RPI-CAM-V2, Raspberry Pi) was modified for microscopy and used alongside 3D printed panels for attaching the camera, optical filters, and LED light source to murine window chambers. Multiple applications for the portable system were developed, each requiring their own setup of filters and stimulating LEDs. The system is powered by a Raspberry Pi 3 Model B single-board computer (RASPBERRYPI3-MODB-1GB, Raspberry Pi), allowing for stream-lined data acquisition.

Imaging tissue oxygenation was the first application developed for the portable system. Oxygen sensing boron nanoparticles were injected into window chambers, while a UV LED was used to stimulate fluorescent and phosphorescent signals. When stimulated by UV light, the boron nanoparticles emit fluorescence and phosphorescence. Fluorescence is stable regardless of oxygenation, while phosphorescence signal from the nanoparticles is quenched in the presence of higher oxygenations. The ratio of fluorescence to phosphorescence was used to calculate oxygen concentration maps of window chamber tissue. Tissue oxygenations in awake and anesthetized mice inhaling varied oxygen concentrations were analyzed. In 5 awake nude mice inhaling 20% O2, the median partial pressure of oxygen was measured as 49 mmHg within their window chambers. From a one-tailed t-test with a false positive correction, 3 of the mice had significantly higher (p ≤ 0.05) tissue oxygenation while anesthetized compared to the awake measurements.

Noting the differences between data collected on awake and anesthetized mice, our system has been validated as a tool for real-time imaging of tissue without the observed effects of anesthesia. By avoiding anesthesia, the developed device allows for continual data acquisition to increase from hours to days. The system is generalizable, and while only two applications are presented in this study, the system could be modified for imaging fluorescently labeled cells/proteins for other bio-molecular interactions.