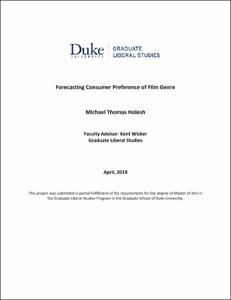 Central to the decision of filmmaking and a film’s success is the consumer response to a film. Specifically, in a market with multiple varied alternatives based on genre, plot, and other film attributes, the subject matter and the preference of the movie going public becomes paramount to attempt to predict. The performance of films is unique in that results vary widely, and, like most art mediums, consumer response is assumed to be largely unpredictable. The research undertaken in this study used past box office returns across difference genres to project whether an expected return can be predicted with relative confidence.

This study attempts to uncover a pattern of film performance correlated by genre to understand if these correlations can be relied upon over time and into the future. The method employed in this study examines the 100 largest film releases as measured by box office performance for each year over a 20-year period, their economic performance and the trending returns over time by genre. This study then charts these performances by genre and by year, then employs a regression analysis for each to confirm if these trends are reliable. The results of this approach show a statistically significant result indicating that consumers do have an expected response to certain genres over others. Chapter six illustrates correlations of performance in some genres that are over twice as strong as alternatives. The resulting correlation coefficient scores are as follows: adventure had a score of .667, action had .780, comedy had .358, thriller/suspense had .681, and drama had .457. This study, the approach and these results conclude that a predictable measurable performance can be applied to something as abstract as “film genre” to forecast a consumer response.