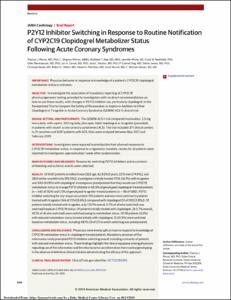 View / Download
203.9 Kb
Date
Authors
Povsic, Thomas J
Ohman, E Magnus
Roe, Matthew T
White, Jennifer
Rockhold, Frank W
Montalescot, Gilles
Cornel, Jan H
Nicolau, Jose C
Steg, P Gabriel
James, Stefan
Bode, Christoph
Welsh, Robert C
Plotnikov, Alexei N
Mundl, Hardi
Gibson, C Michael
Show More
(15 total)
Repository Usage Stats
103
views
60
downloads
Abstract
Importance:Physician behavior in response to knowledge of a patient's CYP2C19 clopidogrel metabolizer status is unknown. Objective:To investigate the association of mandatory reporting of CYP2C19 pharmacogenomic testing, provided to investigators with no direct recommendations on how to use these results, with changes in P2Y12 inhibitor use, particularly clopidogrel, in the Randomized Trial to Compare the Safety of Rivaroxaban vs Aspirin in Addition to Either Clopidogrel or Ticagrelor in Acute Coronary Syndrome (GEMINI-ACS-1) clinical trial. Design, Setting, and Participants:The GEMINI-ACS-1 trial compared rivaroxaban, 2.5 mg twice daily, with aspirin, 100 mg daily, plus open-label clopidogrel or ticagrelor (provided), in patients with recent acute coronary syndromes (ACS). The trial included 371 clinical centers in 21 countries and 3037 patients with ACS. Data were analyzed between May 2017 and February 2019. Interventions:Investigators were required to prestipulate their planned response to CYP2C19 metabolizer status. In response to a regulatory mandate, results for all patients were reported to investigators approximately 1 week after randomization. Main Outcomes and Measures:Reasons for switching P2Y12 inhibitors and occurrence of bleeding and ischemic events were collected. Results:Of 3037 patients enrolled (mean [SD] age, 62.8 [9.0] years; 2275 men [74.9%], and 2824 white race/ethnicity [93.0%]), investigators initially treated 1704 (56.1%) with ticagrelor and 1333 (43.9%) with clopidogrel. Investigators prestipulated that they would use CYP2C19 metabolizer status to change P2Y12 inhibitor in 48.5% of genotyped clopidogrel-treated patients (n = 642 of 1324) and 5.5% of genotyped ticagrelor-treated patients (n = 93 of 1692). P2Y12 inhibitor switching for any reason occurred in 197 patients and was more common in patients treated with ticagrelor (146 of 1704 [8.6%]) compared with clopidogrel (51 of 1333 [3.8%]). Of patients initially treated with ticagrelor, only 1 (0.1% overall; 0.7% of all who switched) was switched based on CYP2C19 status. Of patients initially treated with clopidogrel, 23 (1.7% overall,;45.1% of all who switched) were switched owing to metabolizer status. Of 48 patients (3.6%) with reduced metabolizer status treated initially with clopidogrel, 15 (31.3%) were switched based on metabolizer status, including 48.1% (13 of 27) in which switching was prestipulated. Conclusions and Relevance:Physicians were evenly split on how to respond to knowledge of CYP2C19 metabolizer status in clopidogrel-treated patients. Mandatory provision of this information rarely prompted P2Y12 inhibitor switching overall, including a minority of patients with reduced metabolizer status. These findings highlight the clinical equipoise among physicians regarding use of this information and the reluctance to use information from routine genotyping in the absence of definitive clinical trial data demonstrating the efficacy of this approach. Clinical Trial Registration:ClinicalTrials.gov identifier: NCT02293395.
Type
Conference
Subject
Science & Technology
Life Sciences & Biomedicine
Cardiac & Cardiovascular Systems
Peripheral Vascular Disease
Cardiovascular System & Cardiology
Permalink
https://hdl.handle.net/10161/19189
Published Version (Please cite this version)
10.1001/jamacardio.2019.1510
Collections
More Info
Show full item record Professor of Medicine
Dr. Ohman, Professor of Medicine, received medical degrees from the Royal College of Surgeons in Ireland and the National University of Ireland (1984, Fellowship 1984-1987), and completed his training in cardiology at Duke University (1987-1991), where he has remained on faculty. In 2001, he became Chief of Cardiology at the University of North Carolina at Chapel Hill, where he founded the UNC Heart Center and became its first director. In 2005 he returned to Duke to pursue his interest in ad Adjunct Professor in the Department of Medicine
My clinical activities focus upon general, preventive, and acute care cardiology.  I round regularly on the inpatient general cardiology and coronary care unit (CCU) services and i have a particular interest in the treatment and management of patients with acute myocardial infarction and cardiogenic shock.  In my outpatient clinic, I care for patients with a variety of cardiovascular conditions include chronic coronary artery disease, hypertension, hyperlipidemia, atrial fibrillation,
Alphabetical list of authors with Scholars@Duke profiles.