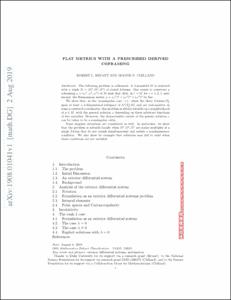 View / Download
291.4 Kb
Authors
Bryant, RL
Clelland, JN
Repository Usage Stats
48
views
16
downloads
Abstract
The following problem is addressed: A $3$-manifold $M$ is endowed with a triple $\Omega = (\Omega^1,\Omega^2,\Omega^3)$ of closed $2$-forms. One wants to construct a coframing $\omega= (\omega^1,\omega^2,\omega^3)$ of $M$ such that, first, $\mathrm{d}\omega^i = \Omega^i$ for $i=1,2,3$, and, second, the Riemannian metric $g=(\omega^1)^2+(\omega^2)^2+(\omega^3)^2$ be flat. We show that, in the `nonsingular case', i.e., when the three $2$-forms $\Omega^i_p$ span at least a $2$-dimensional subspace of $\Lambda^2(T^*_pM)$ and are real-analytic in some $p$-centered coordinates, this problem is always solvable on a neighborhood of $p\in M$, with the general solution $\omega$ depending on three arbitrary functions of two variables. Moreover, the characteristic variety of the generic solution $\omega$ can be taken to be a nonsingular cubic. Some singular situations are considered as well. In particular, we show that the problem is solvable locally when $\Omega^1,\Omega^2,\Omega^3$ are scalar multiples of a single 2-form that do not vanish simultaneously and satisfy a nondegeneracy condition. We also show by example that solutions may fail to exist when these conditions are not satisfied.
Type
Journal article
Subject
math.DG
math.DG
53A55, 53B15
Permalink
https://hdl.handle.net/10161/19200
Collections
More Info
Show full item record