Spatial-temporal variability of radiomic features and its effect on the classification of lung cancer histology. 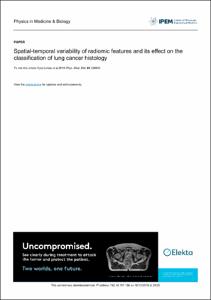 Research Scholar
I am a current resident physician in radiation oncology and will be completing residency in June 2019. I will be starting as faculty in the Department of Radiation Oncology and in the Bakar Computational Sciences Health Institute at the University of California, San Francisco in September 2019. Professor of Radiation Oncology
Clinical trials that are currently enrolling patients include a study investigating lower doses of radiation therapy for patients with diffuse large B-cell lymphoma, with the goal of maintaining excellent tumor control but decreasing the risk of long-term side effects of treatment. I also have an interest in genetic determinants of radiation sensitivity, predictors of local recurrence after surgery for lung cancer, radiation-induced lung injury, and the role of radiation therapy in Assistant Professor of Radiation Oncology
Kyle Lafata is an Assistant Professor of Radiology, Radiation Oncology, and Electrical & Computer Engineering at Duke University. As an imaging physicist and data scientist, Dr. Lafata’s research interests are in image-based phenotyping and computational biomarkers. His dissertation work focused on nature-inspired computational methods and soft-computing paradigms, including the applied analysis of stochastic differential equations, self-organization, and quantum machine learning (i