Hip extensor mechanics and the evolution of walking and climbing capabilities in humans, apes, and fossil hominins. 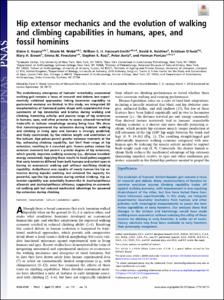 Associate Professor of Evolutionary Anthropology
How did the human body evolve, and how does our species' deep past shape our health and physiology today? Through lab and field research, I investigate the physiology of humans and apes to understand how ecology, lifestyle, diet, and evolutionary history affect metabolism and health. I'm also interested in how ecology and evolution influence musculoskeletal design and physical activity. Field projects focus on small-scale societies, including hunter-gatherers and subsistence farmers, in Africa a
Alphabetical list of authors with Scholars@Duke profiles.