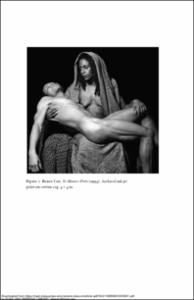 View / Download
482.8 Kb
Date
Author
McLarney, E
Repository Usage Stats
76
views
181
downloads
Abstract
<jats:p>This article charts Beyoncé’s multimedia intervention into the politics of the Trump presidency as she draws on the work of black Muslim and Latinx artists to challenge white monopolies on representation in the Breitbart era. It specifically looks at the political interventions Beyoncé staged through collaborations with Warsan Shire, a British poet born in Kenya to Somali parents; Awol Erizku, an Ethiopian-born American artist raised in the Bronx; and Daniela Vesco, a Costa Rican photographer. This collective of artists forge a black aesthetics at a heightened level of visibility, using new performative technologies to intervene in the politics of #BlackLivesMatter, crackdowns on Muslim and Latinx refugees and immigrants, the proposed wall with Mexico, and neo-Nazi mobilization. Focusing on Beyoncé’s pregnancy announcement, the article explores the politics of representation of black bodies and black lives, as she transforms the trope of suffering black mothers and their martyred black youth into a celebration of black motherhood and the pregnant body. These images are consciously rooted in a genealogy of black women’s representations of black women’s bodies. Despite the political power of these interventions, accusations were leveled at Beyoncé of cultural appropriation and exploitation of suffering by the neoliberal entertainment machine. By mentoring these artists, Beyoncé sought to convey the fertility of creative foment across borders and power hierarchies, even if her star power ultimately eclipsed the message as well as the marginalized artist that she sought to highlight.</jats:p>
Type
Journal article
Permalink
https://hdl.handle.net/10161/19412
Published Version (Please cite this version)
10.1215/02705346-7584892
Publication Info
McLarney, E (2019). Beyoncé’s Soft Power. Camera Obscura: Feminism, Culture, and Media Studies, 34(2). pp. 1-39. 10.1215/02705346-7584892. Retrieved from https://hdl.handle.net/10161/19412.
This is constructed from limited available data and may be imprecise. To cite this article, please review & use the official citation provided by the journal.
Collections
More Info
Show full item record