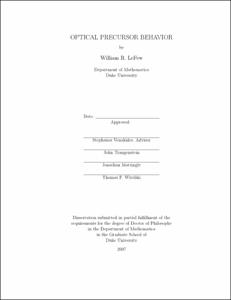 View / Download
3.5 Mb
Date
Author
LeFew, William R.
Advisors
Venakides, Stephanos
Trangenstein, John
Mattingly, Jonathan
Witelski, Thomas P.
Repository Usage Stats
424
views
717
downloads
Abstract
Controlling and understanding the propagation of optical pulses through dispersive media forms the basis for optical communication, medical imaging, and other modern technological advances. Integral to this control and understanding is the ability to describe the transients which occur immediately after the onset of a signal. This thesis examines the transients of such a system when a unit step function is applied. The electromagnetic field is described by an integral resulting from Maxwell’s Equations. It was previously believed that optical precursors, a specific transient effect, existed only for only a few optical cycles and contributed only small magnitudes to the field. The main results of this thesis show that the transients arising from this integral are entirely precursors and that they may exist on longer time scales and contribute larger magnitudes to the field. The experimental detection of precursors has previously been recognized only through success comparison to the transient field resulting from an application of the method of steepest descent to that field integral. For any parameter regime where steepest descents may be applied, this work gives iterative methods to determine saddle points which are both more accurate than the accepted results and to extend into regimes where the current theory has failed. Furthermore, asymptotic formulae have been derived for regions where previous attempts at steepest descent have failed. Theory is also presented which evaluates the applicability of steepest descents in the represention of precursor behavior for any set of parameters. Lastly, the existence of other theoretical models for precursor behavior who may operate beyond the reach of steepest descent is validated through successful comparisons of the transient prediction of those methods to the steepest descent based results of this work.
Type
Dissertation
Department
Mathematics
Subject
Maxwell equations
Mathematics
Permalink
https://hdl.handle.net/10161/195
Citation
LeFew, William R. (2007). Optical Precursor Behavior. Dissertation, Duke University. Retrieved from https://hdl.handle.net/10161/195.
Collections
More Info
Show full item record