Identifying Neural, Genetic, and Behavioral Correlates of the p Factor 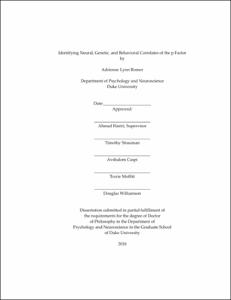 Accumulating mental health research encourages a shift in focus towards transdiagnostic dimensional features that are shared across categorical disorders. In support of this shift, recent studies have identified a general liability factor for psychopathology – called the ‘p factor’ – that underlies shared risk for a wide range of mental disorders. Identifying the behavioral, neural, and genetic correlates of this general liability would substantiate its importance in characterizing the shared origins of mental disorders and help us begin to understand the mechanisms through which the p factor contributes to risk. In the current series of studies, I investigate the behavioral, neural, and genetic correlates of the p factor in two independent samples in order to better understand the mechanisms underlying a general liability for mental illness. I first investigate these correlates in the Duke Neurogenetics Study (DNS) comprised of 1,246 young adult volunteers aged 18-22. I then determine whether the correlates identified in the DNS replicate in a subsample of 481 45 year-old members of a birth cohort from the ongoing Dunedin Longitudinal Study (Dunedin). The Dunedin Study includes over 1,000 participants from Dunedin, New Zealand who have been followed since birth.

In Study 1 (Chapter 3), I show that the p factor, which previously has been identified and related to maladaptive behaviors in the Dunedin cohort, is identifiable in the DNS, a high-functioning young adult sample, and demonstrate that p factor scores map onto a broad range of dysfunctional behaviors. In Study 2 (Chapter 4), using high-resolution multimodal structural neuroimaging in the DNS, I demonstrate that individuals with high p factor scores show reduced structural integrity of pons white matter pathways and reduced gray matter volume in the occipital lobe and left cerebellar lobule VIIb, which is functionally connected with prefrontal regions supporting cognitive control. Consistent with the preponderance of cerebellar afferents within the pons, I observe a significant positive correlation between the white matter integrity of the pons and cerebellar gray matter volume associated with higher p factor scores. In Study 3 (Chapter 5), I replicate and extend these structural alterations in the Dunedin cohort. In Study 4 (Chapter 6), I demonstrate that liabilities for internalizing, externalizing, and thought disorders overlap with some structural neural correlates of the p factor, but also have unique correlates with brain structure in both samples. Finally, in Study 5 (Chapter 7), I show that polygenic risk for schizophrenia is associated with higher p factor scores, and that this association is partly mediated by cortico-cerebellar circuitry in the DNS, but not the Dunedin, sample.

Overall, these findings provide initial evidence that structural alterations in occipital and cortico-cerebellar circuitry supporting core functions related to the basic integration, coordination, and monitoring of information may contribute to a general liability for mental disorders and are robust to differences in sample characteristics. Links between genes, brain, and behavior in the DNS suggest that polygenic risk for schizophrenia may confer increased behavioral risk for general psychopathology through its influence on the capacity to communicate and process information between the cerebrum and the cerebellum through the pons. Failure to replicate these latter associations in the Dunedin cohort suggests important future research directions such as examining more specific genetic influences as well as their interactions with early life experiences on brain structure and general risk for psychopathology.