Major bleeding in patients with peripheral artery disease: Insights from the EUCLID trial. 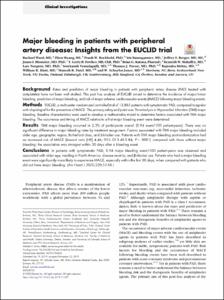 Associate Professor of Medicine
I am an interventional cardiologist with a specific focus on the diagnosis and treatment of patients with vascular disease, and I perform coronary and peripheral angiography and interventions. I have a broad background in cardiovascular site-based research, multicenter clinical trials, clinical event classification, and observational analyses.  Currently, I am helping to lead a Duke Clinical Research Institute (DCRI) effort to coordinate a multinational, multicenter randomized clinical tria