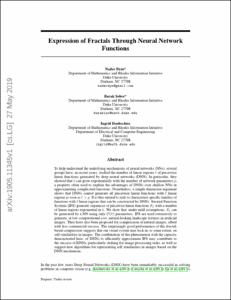 View / Download
594.1 Kb
Authors
Dym, Nadav
Sober, Barak
Daubechies, Ingrid
Repository Usage Stats
37
views
15
downloads
Abstract
To help understand the underlying mechanisms of neural networks (NNs), several groups have, in recent years, studied the number of linear regions $\ell$ of piecewise linear functions generated by deep neural networks (DNN). In particular, they showed that $\ell$ can grow exponentially with the number of network parameters $p$, a property often used to explain the advantages of DNNs over shallow NNs in approximating complicated functions. Nonetheless, a simple dimension argument shows that DNNs cannot generate all piecewise linear functions with $\ell$ linear regions as soon as $\ell > p$. It is thus natural to seek to characterize specific families of functions with $\ell$ linear regions that can be constructed by DNNs. Iterated Function Systems (IFS) generate sequences of piecewise linear functions $F_k$ with a number of linear regions exponential in $k$. We show that, under mild assumptions, $F_k$ can be generated by a NN using only $\mathcal{O}(k)$ parameters. IFS are used extensively to generate, at low computational cost, natural-looking landscape textures in artificial images. They have also been proposed for compression of natural images, albeit with less commercial success. The surprisingly good performance of this fractal-based compression suggests that our visual system may lock in, to some extent, on self-similarities in images. The combination of this phenomenon with the capacity, demonstrated here, of DNNs to efficiently approximate IFS may contribute to the success of DNNs, particularly striking for image processing tasks, as well as suggest new algorithms for representing self similarities in images based on the DNN mechanism.
Type
Journal article
Subject
cs.LG
cs.LG
cs.IT
math.IT
stat.ML
Permalink
https://hdl.handle.net/10161/19596
Collections
More Info
Show full item record Phillip Griffiths Assistant Research Professor
I am currently privilaged to be working with Prof. Ingrid Daubechies. Before that, I have completed my PhD in applied mathematics at Tel-Aviv University under the mentoring of Prof. David Levin. My MSc was co-mentored by Prof. Levin and Prof. Israel Finkelstein from the Department of Archaeology and Ancient Near Eastern Civilizations. My research ranges between analysis of high dimensional data from a geometrical perspective and the applicatio
Alphabetical list of authors with Scholars@Duke profiles.