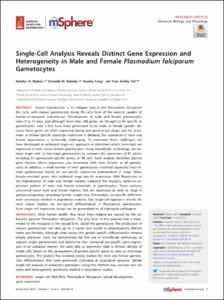 View / Download
4.5 Mb
Date
Authors
Walzer, Katelyn A
Kubicki, Danielle M
Tang, Xiaohu
Chi, Jen-Tsan Ashley
Repository Usage Stats
37
views
19
downloads
Abstract
Sexual reproduction is an obligate step in the Plasmodium falciparum life cycle, with mature gametocytes being the only form of the parasite capable of human-to-mosquito transmission. Development of male and female gametocytes takes 9 to 12 days, and although more than 300 genes are thought to be specific to gametocytes, only a few have been postulated to be male or female specific. Because these genes are often expressed during late gametocyte stages and for some, male- or female-specific transcript expression is debated, the separation of male and female populations is technically challenging. To overcome these challenges, we have developed an unbiased single-cell approach to determine which transcripts are expressed in male versus female gametocytes. Using microfluidic technology, we isolated single mid- to late-stage gametocytes to compare the expression of 91 genes, including 87 gametocyte-specific genes, in 90 cells. Such analysis identified distinct gene clusters whose expression was associated with male, female, or all gametocytes. In addition, a small number of male gametocytes clustered separately from female gametocytes based on sex-specific expression independent of stage. Many female-enriched genes also exhibited stage-specific expression. RNA fluorescent in situ hybridization of male and female markers validated the mutually exclusive expression pattern of male and female transcripts in gametocytes. These analyses uncovered novel male and female markers that are expressed as early as stage III gametocytogenesis, providing further insight into Plasmodium sex-specific differentiation previously masked in population analyses. Our single-cell approach reveals the most robust markers for sex-specific differentiation in Plasmodium gametocytes. Such single-cell expression assays can be generalized to all eukaryotic pathogens.IMPORTANCE Most human deaths that result from malaria are caused by the eukaryotic parasite Plasmodium falciparum The only form of this parasite that is transmitted to the mosquito is the sexual form, called the gametocyte. The production of mature gametocytes can take up to 2 weeks and results in phenotypically distinct males and females, although what causes this gender-specific differentiation remains largely unknown. Here, we demonstrate the first use of microfluidic technology to capture single gametocytes and determine their temporal sex-specific gene expression in an unbiased manner. We were able to determine male or female identity of single cells based on the upregulation of gender-specific genes as early as mid-stage gametocytes. This analysis has revealed strong markers for male and female gametocyte differentiation that were previously concealed in population analyses. Similar single-cell analyses in eukaryotic pathogens using this method may uncover rare cell types and heterogeneity previously masked in population studies.
Type
Journal article
Subject
Plasmodium falciparum
RNA, Protozoan
In Situ Hybridization, Fluorescence
Microfluidics
Gene Expression
Life Cycle Stages
Single-Cell Analysis
Permalink
https://hdl.handle.net/10161/19667
Published Version (Please cite this version)
10.1128/mSphere.00130-18
Publication Info
Walzer, Katelyn A; Kubicki, Danielle M; Tang, Xiaohu; & Chi, Jen-Tsan Ashley (2018). Single-Cell Analysis Reveals Distinct Gene Expression and Heterogeneity in Male and Female Plasmodium falciparum Gametocytes. mSphere, 3(2). 10.1128/mSphere.00130-18. Retrieved from https://hdl.handle.net/10161/19667.
This is constructed from limited available data and may be imprecise. To cite this article, please review & use the official citation provided by the journal.
Collections
More Info
Show full item record