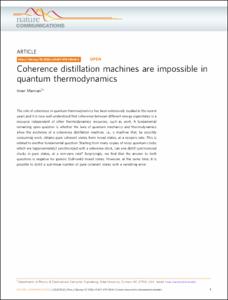 View / Download
599.4 Kb
Date
Author
Marvian, Iman
Repository Usage Stats
194
views
25
downloads
Abstract
The role of coherence in quantum thermodynamics has been extensively studied in the recent years and it is now well-understood that coherence between different energy eigenstates is a resource independent of other thermodynamics resources, such as work. A fundamental remaining open question is whether the laws of quantum mechanics and thermodynamics allow the existence a "coherence distillation machine", i.e. a machine that, by possibly consuming work, obtains pure coherent states from mixed states, at a nonzero rate. This question is related to another fundamental question: Starting from many copies of noisy quantum clocks which are (approximately) synchronized with a reference clock, can we distill synchronized clocks in pure states, at a non-zero rate? In this paper we study quantities called "coherence cost" and "distillable coherence", which determine the rate of conversion of coherence in a standard pure state to general mixed states, and vice versa, in the context of quantum thermodynamics. We find that the coherence cost of any state (pure or mixed) is determined by its Quantum Fisher Information (QFI), thereby revealing a novel operational interpretation of this central quantity of quantum metrology. On the other hand, we show that, surprisingly, distillable coherence is zero for typical (full-rank) mixed states. Hence, we establish the impossibility of coherence distillation machines in quantum thermodynamics, which can be compared with the impossibility of perpetual motion machines or cloning machines. To establish this result, we introduce a new additive quantifier of coherence, called the "purity of coherence", and argue that its relation with QFI is analogous to the relation between the free and total energies in thermodynamics.
Type
Journal article
Subject
quant-ph
quant-ph
cond-mat.stat-mech
physics.atom-ph
Permalink
https://hdl.handle.net/10161/19747
Published Version (Please cite this version)
10.1038/s41467-019-13846-3
Publication Info
Marvian, Iman (2020). Coherence distillation machines are impossible in quantum thermodynamics. Nature Communications, 11(1). 10.1038/s41467-019-13846-3. Retrieved from https://hdl.handle.net/10161/19747.
This is constructed from limited available data and may be imprecise. To cite this article, please review & use the official citation provided by the journal.
Collections
More Info
Show full item record Assistant Professor in the Department of Electrical and Computer Engineering
Iman Marvian completed his PhD in Physics in October 2012 at the University of Waterloo and Perimeter Institute for Theoretical Physics in Waterloo, Ontario. He worked at the University of Southern California (Nov 2012-Aug 2015) and MIT (Sept 2015-Dec 2017) as postdoctoral researcher. His main research interest is quantum information and computation theory. He has worked on a wide range of topics in this field, including quantum algorithms, quantum error suppression, open quantum syst