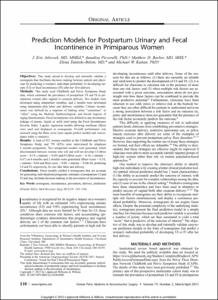 Associate Professor of Obstetrics and Gynecology
Dr. Jelovsek is the Vice Chair of Education and the Director of Data Science for Women’s Health in Department of Obstetrics & Gynecology (OBGYN) at Duke University. He is Board Certified in OBGYN by the American Board of OBGYN and Board Certified in Female Pelvic Medicine & Reconstructive Surgery by the American Board of OBGYN and American Board of Urology. He currently practices Female Pelvic Medicine and Reconstructive Surgery (FPMRS). He has expertise in the development and v
Alphabetical list of authors with Scholars@Duke profiles.