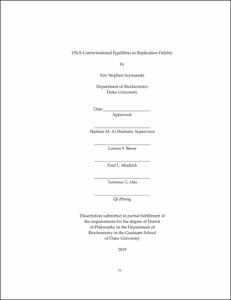 All organisms must accurately replicate their genomic DNA in order to transmit genetic information from generation to generation. The cognate Watson-Crick base pairs (dA•dT, dG•dC) adopt near identical ‘Watson-Crick geometry’ as defined by the hydrogen bonding pattern (height and depth) and the distance between the nucleoside sugar C1’ atoms (width). The shape complementarity of Watson-Crick pairs is a significant determinant in the selection of a correct nucleotide for a given template base during replication. Since the discovery of the DNA double helix, more than 60 years ago, the formation of Watson-Crick-like mismatch base pairs, stabilized by rare, energetically less favorable tautomeric or anionic bases, has been hypothesized as a cause of spontaneous mutation. However, these proposed lowly-populated and short-lived Watson-Crick-like conformational ‘excited states’ are characterized by subtle movements of protons and π-bonds that have proven difficult to visualize experimentally, even with modern biophysical techniques.

We have utilized nuclear magnetic resonance relaxation dispersion experiments in conjunction with kinetic modeling and in vitro assays to characterize the formation of tautomeric and anionic Watson-Crick-like dG•dT excited states in DNA duplexes and investigate their involvement in DNA replication errors. Insertion of the sequence- dependent tautomerization or ionization step into minimal kinetic mechanisms for correct incorporation during replication after the initial binding of the nucleotide, leads to accurate predictions of the probability of dG•dT misincorporation across different polymerases and pH conditions and for a chemically modified nucleotide, and providing mechanisms for sequence-dependent misincorporation. Our results indicate that the system is under thermodynamic control and that the energetic penalty for tautomerization and/or ionization accounts for an approximately 10-2 to 10-3-fold discrimination against misincorporation, which proceeds primarily via tautomeric dGenol•dT and dG•dTenol, with contributions from anionic dG•dT- dominant at pH 8.4 and above, or for some mutagenic nucleotides. Kinetic modeling reveals additional plausible pathways for dG•dT misincorporation in which the tautomerization event takes place prior to binding or in which the polymerase alters the kinetics of tautomerization within the active site.

The conformational landscape of the dA•dG mismatch has been characterized with the use of NMR relaxation dispersion in DNA duplexes. The mismatch has been shown to adopt three predominant forms: Aanti•Ganti, Asyn•Ganti, and A+anti•Gsyn. We have characterized sequence-specific conformational exchange between all three of these base pair forms in multiple sequence contexts. In addition, we find that nearest-neighbor base changes can alter the ground state conformation of the dA•dG base pair between Aanti•Ganti and Asyn•Ganti. Such sequence-specific alterations to the conformational landscape have been proposed to alter reaction rates of an adenine glycosylase repair protein, MutY. Notably, this work shows for the first time that the Asyn•Ganti base pair is able to form in solution both as a ground state and excited state base pair; and may influence the activity of MutY. In addition, two tautomeric forms of the dA•dG base pair have been proposed to form WC-like base pairs but R1ρ experiments targeting the NH2 functional groups of dA and dG have been thus far unable to observe these proposed states.