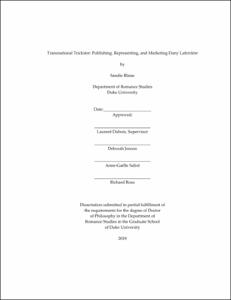 This dissertation uses Haitian-Canadian writer Dany Laferrière’s transnational trajectory as a focal point for a study of the relationship between literature, marketing, power, and creative agency. It analyzes Laferrière’s literary career over the span of thirty years (1985-2018), his portrayal in the press and his work’s packaging and reception in the three places the author has been published in the original French language: Quebec, France, and Haiti. Located at the intersection of cultural studies, literary theory, and postcolonial studies, my study explores the ways in which global migration has changed literary production and consumption, and shaped ideas about nationalism. In this analysis, I argue that Laferrière contributed to reshaping national definitions of literature in all three spaces, and that his work’s marketing and reception have revealed political, social, and cultural changes as well as manifestations of identity politics in all three contexts. Through combined analysis of Laferrière’s novels, film adaptations, interviews in the press, book covers, as well as personal interviews that I conducted with his publishers, this study offers a holistic analysis of the cultural, political, and economic dimensions of literary production and circulation in the French-speaking world and contiguous languages like Haitian Creole. Drawing from Laferrière’s packaging in Quebec and France, the study sheds a new light on the way images of Haiti are constructed in the Western imaginary and how paratext mediates discourses about Caribbean writers. Through the study of the writer’s Haitian publication and Creole translation, my work also offers critical insights into the dynamic power of the Haitian book industry, which scholars have largely overlooked. Finally, by tracing the various factors that enabled Laferrière to emerge and paying particular attention to his recent election to the French Academy, this dissertation illuminates the mechanisms of literary consecration as well as his own creative “trickster” strategy to position himself in the global marketplace. Ultimately, I argue that Laferrière’s transnational trajectory offers a unique lens into the interconnected relationships between literature, markets, postcolonial authors, and nationalism.