The Political Economy of Public Bureaucracy: The Emergence of Modern Administrative Organizations 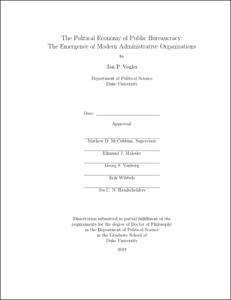 How can we explain the significant variation in the organization and performance of public bureaucracies across countries, across regions, and between the levels of the administrative hierarchy? Considering the high level of path dependence in bureaucratic organization, this dissertation explains divergence in the institutions of public administrations through a set of historical analyses focused on the 19th and early 20th centuries–a time period crucial for the establishment of modern bureaucracies. The second chapter deals with the influence of socio-economic groups in countries that enjoyed domestic political autonomy. Three social classes had fundamentally different interests in the organization of the state apparatus, and their relative political influence was a key factor determining its organizational characteristics. The third and fourth chapters deal with the impact of foreign rule on the bureaucratic organization of countries that did not enjoy domestic political autonomy. Specifically, the third chapter focuses on within-country regional variation in bureaucratic organization and provides an in-depth study of Poland, which was historically ruled by three empires with vastly different bureaucracies. I develop an account of path dependence and suggest that persisting differences in culture and perceptions of public administration are key drivers of regional divergence. Finally, the fourth chapter focuses on variation in bureaucratic organization between levels of the administrative hierarchy and provides an in-depth study of Romania, which was historically partially ruled by the Habsburg Empire and partially autonomous. I develop a theoretical framework of imperial pervasiveness that explains differential effectiveness of external rule along the administrative hierarchy.