Development of a Toolbox for Automated, Speculum-Free, Self-Cervical Cancer Screening with Applications to Resource-Limited Settings 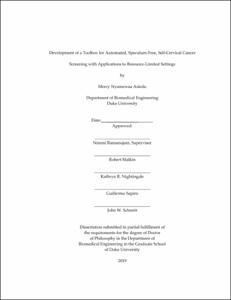 Cervical cancer is the fourth most common female cancer in the world, primarily caused by the human papillomavirus (HPV). It about 570, 000 women annually, killing more than half of those affected. Approximately 90% of cervical cancer mortality occurs in low- and middle- income countries and this number is expected to rise to 98% by 2030, furthering global disparities in health care. Even within high-income countries where cervical cancer incidence and mortality has decreased drastically - by over 70% over the last 50 years - regional and racial disparities in cervical cancer mortality continue to exist among people with limited access to health care. The drastic decrease in incidence and mortality among high-income countries can be primarily attributed to a multi-tiered screening and treatment approach.

The American Society for Colposcopy and Cervical Pathology (ASCCP) recommends screening with the Papanicolau (Pap) smear/Cytology every 3 years from the age of 21-29 years. For women aged 30-65 years, HPV and Pap smear co-testing every 5 years, or HPV alone every 3 years is recommended. Positive results have a variety of follow up management recommendations. For a high-risk result, a Colposcopy-guided biopsy is performed to provide diagnostic conformation and classification of pre-cancer or cancer. Colposcopy involves application of contrast agents (3-5% acetic acid and/or Schillers iodine) onto the cervix. These sources of contrast produce changes in pre-cancerous lesions which are illuminated and magnified using a a colposcope. Biopsies (small pieces of tissue) are taken from the highlighted lesion regions and sent to a pathologist, which then informs treatment management.

This approach to screening, diagnosis and treatment, though highly effective, requires expensive equipment for cytology, colposcopy and histopathology analysis which may not be available in resource-limited settings. It also involves multiple visits for each tier with long wait times for results in between, leading to high rates of loss to follow-up among women.

Due to these limitations, the WHO recommends a screen-and-treat approach which involves a single visit with visual inspection of the cervix with the naked eye after application of acetic acid (VIA) followed by treatment with cryotherapy, which involves killing pre-cancerous cells with extremely low-temperatures or by LEEP for non-cryotherapy eligible women. Recently changes have been made to WHO guidelines recommending utilization of HPV screening in combination with or over the VIA test, where available followed by treatment. However due to limitations in cost and time to attain results associated with HPV tests, VIA is still recommended and used in most resource-limited settings.

VIA on its own is however not an appropriate measure due to lack of sensitivity, from visualizing cervix changes with the naked eye, lack of specificity associated with features which might also be seen in benign lesions and in other cervical trauma and inter-provider variability. Additionally, the lack of documentation with VIA limits quality control and opportunities for training. Finally, the speculum used not only in VIA but in all aspects of screening has been demonstrated as a barrier and associated with pain/discomfort, vulnerability and fear.

The goal of this work is to overcome these barriers using three main aims (1) develop a portable, low-cost cervix imaging device, the Callascope, that can be used without the speculum and potentially enable self-imaging for cervical cancer screening. (2) Validate the device through clinical studies and in-depth interviews, to determine feasibility of visualizing the cervix with a provider and by the patient, and (3) develop algorithms for automated classification of pre-cancer to reduce inaccuracies and inter-provider variability.

For aim 1, different designs were explored for an introducer which would replace the speculum, using 3D computer-aided design (CAD) software, and mechanical testing simulations were performed on each. Designs were rapidly prototyped and tested using a custom vaginal phantom across a range of vaginal pressures and uterine tilts to select an optimal design. Two final designs were tested on fifteen volunteers to assess cervix visualization, comfort and usability as compared to the speculum and the optimal design, a curved-tip inserter, was selected for subsequent use. Additionally, a smaller version of the Pocket Colposcope, a low-cost imaging device with image quality on par with higher end colposcope, was developed to accommodate the introducer and enable use without the speculum. Image quality assessment was performed to compare the smaller 2MP Pocket Colposcope, referred to as the Callascope to that of the original 5 MP Pocket Colposcope.

The final introducer device has a slim tubular body with a funnel-like curved tip measuring approximately 2.5-2.8 cm in diameter. The introducer has a channel through which the Callascope, a 2 megapixel (MP) mini camera with LED illumination fits to enable image capture. Mechanical finite element testing simulations with an applied pressure of 15 cm H2O indicated a high factor of safety (90.9) for the inserter. Testing of the device with a custom vaginal phantom, across a range of supine vaginal pressures and uterine tilts (retroverted, anteverted and sideverted), demonstrated image capture with a visual area comparable to that of the speculum for a normal/axial positioned uteri and significantly better than that of the speculum for anteverted and sideverted uteri (p<0.00001). A channel enabling application of liquid contrasts (Acetic acid or Lugol’s iodine) by spraying was developed and tested for ability to cover spray targets. Image quality testing with resolution and color targets demonstrated comparable image quality at low magnification.

For aim 2, 3 main clinical studies were conducted to assess the feasibility of the device as well as various in-depth interviews to understand attitudes towards the Callascope and acceptability for self-screening. For the clinical studies, a pilot was first conducted with fifteen volunteers through physician-assisted insertion to assess cervix visualization, comfort and usability as well as to optimize the design. Results showed adequate cervix visualization for 83% of patients. In addition, questionnaire responses from volunteers indicated a 92.3% overall preference for the inserter over the speculum and all indicated that the inserter was more comfortable than the speculum.

This was followed by a clinical study in which a physician imaged the cervix of patients using both the speculum and Callascope in a 2×2 crossover design for n=28 patients. The clinical study data indicated that the Callascope enabled similar visualization compared to the speculum while significantly improving patient experience. With physician insertion and manipulation, the Callascope enabled cervix visualization for 82% of the participants.

The third study involved a feasibility study with 12 volunteers for home-based self-cervix imaging with the Callascope. Eighty-three percent of participants were able to visualize their cervix with the Callascope on the first try and 100% after multiple attempts.

For the third aim, I developed a series of methods and algorithms for automated analysis of cervigrams (colposcopy images of the cervix) with various contrasts and a combination of the contrasts. First, I developed algorithms to pre-process pathology-labeled cervigrams and to extract simple but powerful color and textural-based features. The features were used to train a support vector machine model to classify cervigrams based on corresponding pathology for visual inspection with acetic acid (VIA), visual inspection with Lugol’s iodine (VILI), green illumination vascular imaging (GIVI) and various combination of these contrasts. The initial framework built on VIA and VILI achieved a sensitivity, specificity, and accuracy of 81.3%, 78.6%, and 80.0%, respectively when used to distinguish cervical intraepithelial neoplasia (CIN+) relative to normal and benign tissues. This is superior to the average values achieved by expert physicians on the same data set for discriminating normal/benign from CIN+ (sensitivity=77%, specificity=51%, accuracy=63%). For next steps, the methods used were extrapolated to a larger data set and results for VIA only, VIA+GIVI, VIA+VILI, and VIA+VILI+GIVI were explored. With additional contrast, diagnostic accuracy was increased. The results suggest that utilizing simple color- and textural-based features from VIA, VILI and GIVI images may provide unbiased automation of cervigrams, and that combining contrasts improved on only VIA use. This would enable automated expert-level diagnosis of cervical pre-cancer at the point-of-care.