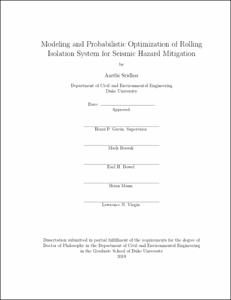 A new model for Rolling Isolation Systems(RIS) is developed using Gauss's Principle of Least Constraint (GPLC). Gauss Principle of Least Constraint is a versatile method that can be used to model systems with constrained dynamics and is agnostic to the type of constraints that need to be enforced. In GPLC models, constraints are enforced in the acceleration level regardless of their classification and the equations of constrained motion are then presented in KKT form. Since, enforcing constraints in differentiated form may lead to numerical integration issues, a novel method, Direct State Correction has been proposed and implemented. Direct State Correction, unlike other constraint stabilization techniques, ensures that the constraints are exactly satisfied at each time step by correcting the states of the system before computing each state derivative. The widely used method of Baumgarte stabilization does not stabilize constraint errors for the RIS system studied in this work and in addition it appears to provide no additional stability or accuracy when implemented along with Direct State Correction Method.

In order to optimize the RIS, a data set of real recorded building motions from the Strong Motion Virtual Data Center is put together with consideration of the type of buildings, earthquakes and locations the RIS is expected to perform in. A total of 62 tri-axial floor motions were selected from 32 buildings and 5 representative earthquakes. It is discovered buildings undergo significant vertical motion and the current isolation system is designed to only be effective for horizontal motion, and therefore a vertical isolation system is added to the current RIS.

The dynamics of the RIS are purely dependent on the dish shape and damping present in the system, so with these design variables in mind, the new RIS with vertical isolation is optimized under a probabilistic framework. The optimization uses Incremental Dynamic Analysis (IDA) and the theorem of total probability in order to arrive at an objective function that minimizes the overall rate of exceedance of a desired threshold probability. The optimization is found to be sensitive to the initial starting guess of the design variables, the input motion used to simulate the RIS and the thresholds set for evaluating the performance of the RIS. The optimal shape of the dishes is found to be a variation of a cubic profile and linearly increasing rolling resistance damping. This new design for the RIS shows significant improvement over the current system. Finally, an implementation of the proposed design of the RIS dish shape, damping and vertical isolation system is presented.