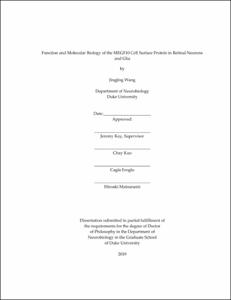 In the central nervous system, billions of neurons interconnect with precision to form morphologically complex and functionally diverse neural circuits. The stereotypical fashion by which neurons assemble suggests that cell-surface molecular cues can act as identity tags during development. These cell surface receptors allow neurons to distinguish between circuit partners, incorrect connections and homotypic neighbors. Multiple EGF-like domains 10 (Megf10) was previously identified to mediate homotypic recognition of certain retinal cell types. Genetic evidence suggests that MEGF10 acts as both ligand and receptor to initiate cell-cell repulsion. Although its significance in cell-cell recognition has been demonstrated, the exact mechanism of how MEGF10 mediates mosaic formation remains unclear. Specifically, the biochemical basis of MEGF10-MEGF10 interaction is largely unknown nor do we have knowledge on what molecules are involved in signaling transduction. Further, MEGF10 is also expressed in glia cells, but it has not been tested if this MEGF10 recognition event is neuron specific.To address these questions, we decided to first characterize the molecular components of the MEGF10 complex. We determined MEGF10 complex composition through co-immunoprecipitation (co-IP) and chemical crosslinking and discovered that MEGF10 forms a lateral complex. Truncation and co-IP studies reveal that the interacting motifs are located on the ectodomain of MEGF10. Such binding is not restricted to MEGF10 as we also discovered hetero-multimers between MEGF10 and MEGF12. Next, to identify other molecules in the MEGF10 signaling pathway, we performed IP to isolate native MEGF10 interacting complexes and conducted proteomic analysis. We found previously known MEGF10-interacting molecules such as Dynamin1 and Traf4, as well as novel MEGF10 associating candidates. Our identification of interacting molecules that facilitate cytoskeletal and membrane rearrangement suggests that MEGF10 activates these cellular processes. Finally, we characterized Müller glia organization through a genetic-based labeling method. With a MEGF10 mutant mouse, we determined that MEGF10 is not necessary for glial array formation. We conclude that MEGF10 has distinct functions in neurons vs. glia. This study sets the stage to describe the molecular mechanism by which MEGF10 mediates cell-cell recognition, potentially uncovered novel MEGF10 interactions, and distinguishes MEGF10 neuronal function from its role in glia.