Diversity of Species and Sexual Reproduction in the Fungal Genus Cryptococcus 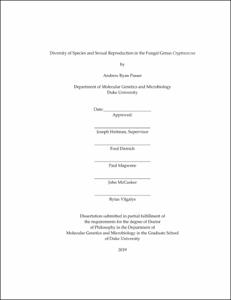 Speciation is a central mechanism of biological diversification. While speciation is well studied in plants and animals, in comparison, relatively little is known about speciation in fungi. One fungal model is the Cryptococcus genus, which is best known for the pathogenic Cryptococcus neoformans/Cryptococcus gattii species complex that causes >200,000 new human infections annually. Elucidation of how these species evolved into important human-pathogenic species remains challenging and can be advanced by studying the most closely related nonpathogenic species, Cryptococcus amylolentus and Tsuchiyaea wingfieldii. However, these species have only four known isolates, and available data were insufficient to determine species boundaries within this group. By analyzing full-length chromosome assemblies, we reappraised the phylogenetic relationships of the four available strains, confirmed the genetic separation of C. amylolentus and T. wingfieldii (now Cryptococcus wingfieldii), and revealed an additional cryptic species, for which the name Cryptococcus floricola is proposed. The genomes of the three species are ~ 6% divergent and exhibit significant chromosomal rearrangements, including inversions and a reciprocal translocation that involved intercentromeric ectopic recombination, which together likely impose significant barriers to genetic exchange. Using genetic crosses, we show that while C. wingfieldii cannot interbreed with any of the other strains, C. floricola can still undergo sexual reproduction with C. amylolentus. However, most of the resulting spores were inviable or sterile or showed reduced recombination during meiosis, indicating that intrinsic postzygotic barriers had been established.

A second organism of interest from the Cryptococcus genus is C. depauperatus. This organism is unusual among the genus for its continuously activated sexual cycle. While other members of the genus enter their sexual cycle only under special circumstances, C. depauperatus is a homothallic (self-fertile) species that constantly produces basidiospores when grown on solid media. We sought to discover what genetic elements were responsible for its behavior. We began by analyzing its genome and found homologs of MF, a gene encoding an alpha pheromone, and STE3, a gene encoding a pheromone receptor. A phylogenetic analysis of the two genes shows that they are from opposite mating types and should be compatible with one another. To test whether MF encodes a functional pheromone, we heterologously expressed it as a transgene in MATa and MAT strains of C. neoformans. MATa cells with the transgene became self-filamentous, while MAT cells were unaffected. We then made MATa MF mutants that had a deletion of STE3 or STE6 (the pheromone exporter gene). All of the deletion mutants lost the propensity to self-filament. Therefore, MF encodes a pheromone that can be detected by the Ste3 receptor of MATa cells and exported by Ste6. Additionally, we found that growth in liquid culture suppresses sporulation in C. depauperatus and used this fact to compare mRNA expression levels between cultures that were actively sporulating and those that were not. MF, STE3, and STE6 were all upregulated under conditions that permit sporulation. Thus, we have shown that one factor contributing to the constant sexual cycle of C. depauperatus is that it produces a pheromone and a pheromone receptor that are compatible with each other.