The epidemiology of alcohol use disorders and subthreshold dependence in a middle-aged and elderly community sample. 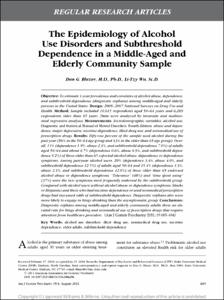 View / Download
232.1 Kb
Date
Authors
Wu, Li-Tzy
Blazer, Daniel
Repository Usage Stats
5
views
1
downloads
Abstract
To estimate 1-year prevalence and correlates of alcohol abuse, dependence, and subthreshold dependence (diagnostic orphans) among middle-aged and elderly persons in the United States.2005-2007 National Surveys on Drug Use and Health.Sample included 10,015 respondents aged 50-64 years and 6,289 respondents older than 65 years. Data were analyzed by bivariate and multinomial regression analyses.Sociodemographic variables; alcohol use; Diagnostic and Statistical Manual of Mental Disorders, Fourth Edition abuse and dependence; major depression; nicotine dependence; illicit drug use; and nonmedical use of prescription drugs.Fifty-one percent of the sample used alcohol during the past year (56% in the 50-64 age group and 43% in the older than 65 age group). Overall, 11% (dependence 1.9%, abuse 2.3%, and subthreshold dependence 7.0%) of adults aged 50-64 and about 6.7% (dependence 0.6%, abuse 0.9%, and subthreshold dependence 5.2%) of those older than 65 reported alcohol abuse, dependence or dependence symptoms. Among past-year alcohol users, 20% (dependence 3.4%, abuse 4.0%, and subthreshold dependence 12.5%) of adults aged 50-64 and 15.4% (dependence 1.3%, abuse 2.1%, and subthreshold dependence 12.0%) of those older than 65 endorsed alcohol abuse or dependence symptoms. "Tolerance" (48%) and "time spent using" (37%) were the two symptoms most frequently endorsed by the subthreshold group. Compared with alcohol users without alcohol abuse or dependence symptoms, blacks or Hispanics and those who had nicotine dependence or used nonmedical prescription drugs had increased odds of subthreshold dependence. Diagnostic orphans also were more likely to engage in binge drinking than the asymptomatic group.Diagnostic orphans among middle-aged and elderly community adults show an elevated rate for binge drinking and nonmedical use of prescription drugs that require attention from healthcare providers.
Type
Journal article
Subject
Humans
Substance-Related Disorders
Alcoholism
Health Surveys
Logistic Models
Alcohol Drinking
Interview, Psychological
Comorbidity
Diagnostic and Statistical Manual of Mental Disorders
Aged
Middle Aged
Female
Male
Permalink
https://hdl.handle.net/10161/19988
Published Version (Please cite this version)
10.1097/JGP.0b013e3182006a96
Publication Info
Wu, Li-Tzy; & Blazer, Daniel (2011). The epidemiology of alcohol use disorders and subthreshold dependence in a middle-aged and elderly community sample. The American journal of geriatric psychiatry : official journal of the American Association for Geriatric Psychiatry, 19(8). pp. 685-694. 10.1097/JGP.0b013e3182006a96. Retrieved from https://hdl.handle.net/10161/19988.
This is constructed from limited available data and may be imprecise. To cite this article, please review & use the official citation provided by the journal.
Collections
More Info
Show full item record

Professor of Psychiatry and Behavioral Sciences
I am currently semi-retired. Most of my recent work has been focused on roles with the National Academy of Medicine (former Institute of Medicine). I have chaired three committees during the past four years, one on the mental health and substance use workforce, one on cognitive aging, and one on hearing loss in adults. I currently also chair the Board on the Health of Select Populations for the National Academies. In the past I have been PI on a number of research