The epidemiology of at-risk and binge drinking among middle-aged and elderly community adults: National Survey on Drug Use and Health. 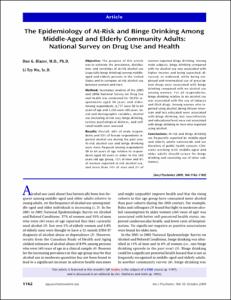 View / Download
190.8 Kb
Date
Authors
Blazer, Dan G
Wu, Li-Tzy
Repository Usage Stats
37
views
12
downloads
Abstract
The purpose of this article was to estimate the prevalence, distribution, and correlates of at-risk alcohol use (especially binge drinking) among middle-aged and elderly persons in the United States and to compare at-risk alcohol use between women and men.Secondary analysis of the 2005 and 2006 National Survey on Drug Use and Health was conducted for 10,953 respondents aged 50 years and older. Among respondents, 6,717 were 50 to 64 years of age and 4,236 were > or =65 years. Social and demographic variables, alcohol use (including at-risk use), binge drinking, serious psychological distress, and self-rated health were assessed.Overall, 66% of male respondents and 55% of female respondents reported alcohol use during the past year. At-risk alcohol use and binge drinking were more frequent among respondents 50 to 64 years of age relative to respondents aged 65 years or older. In the > or =65 years old age group, 13% of men and 8% of women reported at-risk alcohol use, and more than 14% of men and 3% of women reported binge drinking. Among male subjects, binge drinking compared with no alcohol use was associated with higher income and being separated, divorced, or widowed, while being employed and nonmedical use of prescription drugs were associated with binge drinking compared with no alcohol use among women. For all respondents, binge drinking relative to no alcohol use was associated with the use of tobacco and illicit drugs. Among women who reported using alcohol, being African American and less educated were associated with binge drinking, but race/ethnicity and educational level were not associated with binge drinking in men who reported using alcohol.At-risk and binge drinking are frequently reported by middle-aged and elderly adults nationwide and are therefore of public health concern. Clinicians working with middle-aged and older adults should screen for binge drinking and coexisting use of other substances.
Type
Journal article
Subject
Humans
Substance-Related Disorders
Alcoholism
Data Collection
Geriatric Assessment
Health Surveys
Prevalence
Risk Factors
Alcohol Drinking
Age Factors
Sex Factors
Age Distribution
Health Status
Socioeconomic Factors
Aged
Middle Aged
Educational Status
United States
Female
Male
Surveys and Questionnaires
Permalink
https://hdl.handle.net/10161/20002
Published Version (Please cite this version)
10.1176/appi.ajp.2009.09010016
Publication Info
Blazer, Dan G; & Wu, Li-Tzy (2009). The epidemiology of at-risk and binge drinking among middle-aged and elderly community adults: National Survey on Drug Use and Health. The American journal of psychiatry, 166(10). pp. 1162-1169. 10.1176/appi.ajp.2009.09010016. Retrieved from https://hdl.handle.net/10161/20002.
This is constructed from limited available data and may be imprecise. To cite this article, please review & use the official citation provided by the journal.
Collections
More Info
Show full item record