Non-prescribed use of pain relievers among adolescents in the United States. 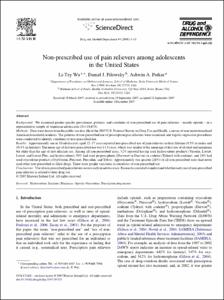