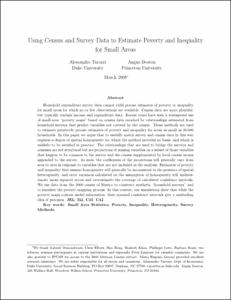 View / Download
756.6 Kb
Date
Authors
Deaton, A
Tarozzi, Alessandro
Repository Usage Stats
241
views
1,321
downloads
Abstract
Household expenditure survey data cannot yield precise estimates of poverty or inequality for small areas for which no or few observations are available. Census data are more plentiful, but typically exclude income and expenditure data. Recent years have seen a widespread use of small-area “poverty maps” based on census data enriched by relationships estimated from household surveys that predict variables not covered by the census. These methods are used to estimate putatively precise estimates of poverty and inequality for areas as small as 20,000 households. In this paper we argue that to usefully match survey and census data in this way requires a degree of spatial homogeneity for which the method provides no basis, and which is unlikely to be satisfied in practice. The relationships that are used to bridge the surveys and censuses are not structural but are projections of missing variables on a subset of those variables that happen to be common to the survey and the census supplemented by local census means appended to the survey. As such, the coefficients of the projections will generally vary from area to area in response to variables that are not included in the analysis. Estimates of poverty and inequality that assume homogeneity will generally be inconsistent in the presence of spatial heterogeneity, and error variances calculated on the assumption of homogeneity will underestimate mean squared errors and overestimate the coverage of calculated confidence intervals. We use data from the 2000 census of Mexico to construct synthetic “household surveys” and to simulate the poverty mapping process. In this context, our simulations show that while the poverty maps contain useful information, their nominal confidence intervals give a misleading idea of precision.
Type
Journal article
Subject
Heterogeneity
Inequality
Small area statistics
Survey Methods
poverty
Permalink
https://hdl.handle.net/10161/2002
Collections
More Info
Show full item record