High prevalence of substance use disorders among adolescents who use marijuana and inhalants. 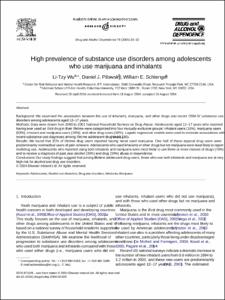 View / Download
128.4 Kb
Date
Authors
Wu, Li-Tzy
Pilowsky, Daniel J
Schlenger, William E
Repository Usage Stats
46
views
64
downloads
Abstract
BACKGROUND: We examined the association between the use of inhalants, marijuana, and other drugs and recent DSM-IV substance use disorders among adolescents aged 12-17 years. METHODS: Data were drawn from 2000 to 2001 National Household Surveys on Drug Abuse. Adolescents aged 12-17 years who reported having ever used an illicit drug in their lifetime were categorized into four mutually exclusive groups: inhalant users (16%), marijuana users (53%), inhalant and marijuana users (16%), and other drug users (15%). Logistic regression models were used to estimate associations with recent substance use diagnoses among lifetime adolescent drug users (N=10,180). RESULTS: We found that 31% of lifetime drug users reported having never used marijuana. One half of these atypical drug users were predominantly nonmedical users of pain relievers. Adolescents who used inhalants or other drugs but not marijuana were least likely to report multidrug use. Adolescents who reported using both inhalants and marijuana were most likely to use three or more classes of drugs (73%) and to receive a diagnosis of past year alcohol (35%) and drug (39%) abuse or dependence. CONCLUSIONS: Our study findings suggest that among lifetime adolescent drug users, those who use both inhalants and marijuana are at very high risk for alcohol and drug use disorders.
Type
Journal article
Subject
Humans
Substance-Related Disorders
Alcoholism
Marijuana Abuse
Street Drugs
Administration, Inhalation
Data Collection
Prevalence
Adolescent
Child
Female
Male
Permalink
https://hdl.handle.net/10161/20036
Published Version (Please cite this version)
10.1016/j.drugalcdep.2004.08.025
Publication Info
Wu, Li-Tzy; Pilowsky, Daniel J; & Schlenger, William E (2005). High prevalence of substance use disorders among adolescents who use marijuana and inhalants. Drug and alcohol dependence, 78(1). pp. 23-32. 10.1016/j.drugalcdep.2004.08.025. Retrieved from https://hdl.handle.net/10161/20036.
This is constructed from limited available data and may be imprecise. To cite this article, please review & use the official citation provided by the journal.
Collections
More Info
Show full item record