Bad goods: On the political morality of production and consumption in global supply chains 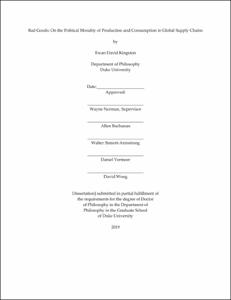 People buy many goods produced in ways that appear to call for a remedy or a reaction from actors in developed countries: these are goods which appear to have “grave flaws” in the upstream supply chain. For example, one can buy products produced by firms which routinely clear-cut forests, employ child or forced labor, defy domestic health-and-safety laws, intimidate labor organizers, and so on. On the other hand, many of the global poor rely on the employment opportunities that global production networks create, and developing countries tend to see their low production costs as their comparative advantage to attract foreign investment and upgrade to higher stages of development. In this dissertation, I explore different aspects of the moral, political and social philosophy surrounding grave flaws, particularly what they entail for consumers in affluent countries. Chapters 1-3 concern the appropriate role of consumers and those who would mobilize them to remedy grave flaws. In Chapter 1, I survey the kinds of moral relationship that consumers might have to the grave flaws. I then ask under what conditions an individual consumer has strong moral reasons to react to grave flaws by practicing selective purchasing. I conclude that the deep epistemic difficulties surrounding recognising each good’s connection with a grave flaw, and the effects of switching to apparently better products, mean consumers do not typically have strong moral reasons to practice conscientious consumption. Chapters 2 and 3 turn to consider what I call political consumerism, practiced by consumers as an aggregate group, mobilized by those who aim to remedy some of the grave flaws. In Chapter 2 I raise concerns about the necessity, effectiveness, and risks of political consumerism, and argue that it might be an effective and appropriate means to remedy grave flaws in global supply chains only in rather specific circumstances. Furthermore, in Chapter 3, I argue that because political consumerism threatens several liberal-democratic values, the mobilizers of political consumerism should attempt to apply more deliberative and democratic elements to their campaigns. Finally, in Chapter 4, I turn to the question of which flaws in supply chains are actually grave. I use the apparel industry as an example, and argue that, apart from outright fraud and coercion, cases of firms trying to undermine or ignore attempts to collectively overcome systemic market failures in the supply chain are the grave flaws we in affluent countries should be most concerned about.