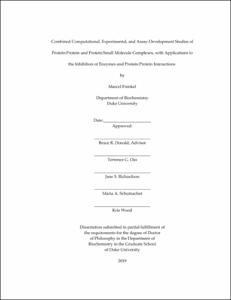 Despite the best efforts of both academia and the pharma industry, most non-resectable cancers remain uncurable and lethal. The world health organization (WHO) believes cancer to be the second leading cause of death worldwide, with roughly 9.6 million deaths in 2018. Meanwhile, the emergence of antimicrobial resistance (AMR), or superbugs, is an increasingly large medical crisis, with estimates as high as 700,000 deaths for 2018 worldwide. This number is increasing rapidly. These unmet medical needs, although distinct, are intimately related by the need for better chemistry and intelligent drug design.

Both AMR and cancer could benefit from the expansion of the druggable proteome through the inhibition of protein-protein interactions (PPIs). PPIs drive both intra- and inter-cellular communication, and therefore their inhibition is vital for disease modulation. Moreover, both AMR and cancer therapeutics suffer from the rapid emergence of drug resistance. Even great drugs that function perfectly at first frequently lose effectiveness a few months later, due to the rapid emergence of drug resistance.

Here, I discuss my contributions towards developing a PPI inhibitor to KRas, the most commonly activated oncogene in cancer. Through the use of OSPREY, a state-of-the-art computational protein and drug design (CPDD) software, and using KRas’ native ligand Raf-1 RBD as a starting point, we developed a super-binder with single-digit nanomolar affinity for KRas. The development and validation of this biologic inhibitor required the development of four novel biochemical assays to study binding to KRas and the inhibition of the KRas:Raf interaction.

Finally, I discuss lessons learned from benchmarking OSPREY and share observations that can be used by drug designers using CPDD tools to enhance the accuracy and predictive potential of their results.

In conclusion, a combination of OSPREY and biochemical assays was used towards overcoming two of the largest limitations in drug development that directly affect global human health: the development of PPI inhibitors and overcoming drug resistance. We identified a novel hot-spot in the KRas:Raf interface that can successfully be used to optimize the PPI and develop a biologic inhibitor to KRas. We generated models that explain the mechanism of inhibition of both V31L and F98Y in the context of chiral evasion through a tricyclic NADPH configuration, and we benchmarked OSPREY and observed features that can contribute towards the predictive accuracy of CPDD tools.