Particle Attachment Efficiency: Investigations into a Functional Assay to Predict Mobility and Plant Accumulation of Nanoparticles in Soils 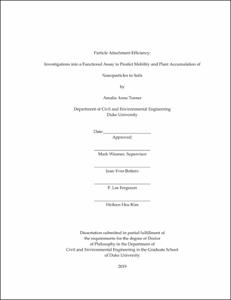 Engineered nanomaterials (ENMs) will increasingly be incorporated into products for widespread use, and release of these materials to the environment is expected to rise accordingly. Due to the difficulty of detecting and measuring ENMs in the environment and the need to predict material impacts long before commercialization occurs, ENM fate in the environment is often estimated using models. However, few standard protocols yet exist for the measurement of ENM properties that inform model parameterization. The work described here addresses this need through the development of a functional assay to generate data on an intermediate process affecting ENM outcomes in natural soils. Parameters quantified in a functional assay encompass the aggregate effects of the system properties on ENM behavior. Thus, data critical to modeling ENM fate, transport, and transformation in the environment can be generated even when mechanisms driving NP behavior are not known. The focus of this body of work is a functional assay that derives the affinity of ENMs for collector surfaces from measurements of the rate of ENM aggregation with collectors (e.g., glass beads, soils) in batch systems. The assay quantifies the system-dependent particle attachment efficiency (alpha), a critical descriptor for modeling NP fate in the environment.

The overarching hypothesis of this work is that trends in soil-nanoparticle (NP) attachment efficiencies can be used to predict trends in NP mobility in soils and bioavailability to plants in soils. In this dissertation, I first explore the potential connection between alpha and bioavailability to plants by developing methodologies and generating results in well-defined model systems. I then extend these methods to the determination of alpha for NPs with natural soils and identify trends related to system characteristics. Finally, I investigate whether NP removal kinetics in soil pore waters and NP accumulation by plants in natural soils vary as a function of alpha.

The functional assay method for determining particle attachment efficiencies of NPs with model collectors in well-defined batch systems was used to generate alphas for a range nanoparticles with glass beads in the presence and absence of natural organic matter. These trends in alpha were compared against trends in the accumulation of NPs by plants from model systems resembling those of batch tests. We found an inverse linear dependency between alpha and plant accumulation, suggesting that increasing attachment efficiency between NPs and model collector grains leads to decreasing NP accumulation by plants grown in a substrate of those collector grains.

We adapted the particle attachment efficiency functional assay methodology for use with natural soil systems and determined alphas for 10 soils and gold nanoparticles (AuNPs) with four different surface coatings. A consistent trend related to the AuNP surface treatment was observed in nearly all soils, with positively charged or nonionic polymer coatings resulting in high attachment efficiencies (typically on the order of 10-1 – 100), the small organic acid coating resulting in intermediate alphas (~10-4 – 10-2) that varied significantly with the properties of the soil extracts, and the large polyelectrolyte biopolymer coating leading to the lowest values of alpha (~10-5 – 10-4). This finding demonstrates that engineered surface treatments can exert a high level of influence on NP behavior even in complex systems where natural macromolecular coatings would normally be assumed to mask the influence of engineered coatings.

By extensively characterizing the components of the batch systems, we identified potential drivers of alpha that were specific to each AuNP surface treatment, and we used machine learning to identify a subset of system characteristics that could be used to predict alpha trends generally. While the more granular analysis by surface treatment revealed some explicit connections between AuNP coatings and extrinsic AuNP properties (e.g., electrophoretic mobility, hydrodynamic diameter), soil extract properties (e.g., pH), and soil properties (e.g., oxalate-extractable aluminum, median soil diameter, soil organic carbon), the more conservative machine-learning approach identified only characteristics relating to solution chemistry as important to the prediction of alpha. Indeed, the model predicted high, intermediate, and low alphas with more than 75 percent accuracy based on system characteristics, but performance suffered most for the mid-range alphas, suggesting that further optimization is needed to identify underlying factors affecting intermediate attachment efficiency.

Finally, we determined that while trends in particle attachment efficiency were generally predictive of trends in AuNP concentrations and removal kinetics in the pore waters of soils, alpha trends were only predictive of relative accumulation of different AuNPs within the same soil and not predictive of the trends observed across soils. We attribute this lack of predictivity to soil compaction and waterlogging in soils with high clay or organic matter contents that led to non-uniform growth of plants across soils and a lack of vertical transport of AuNPs in all soils, ultimately resulting in discrepancies in the local AuNP concentrations to which root systems were exposed.

The work contained in this dissertation contributes to our understanding of factors driving NP mobility and bioavailability in soils by identifying an expected range of particle attachment efficiencies of soils possessing a broad range of characteristics with AuNPs stabilized with commonly used surface treatments. The methodologies and results generated as part of this work can be used to parameterize NP fate and transport models in the near term, while trends identified between alpha and system characteristics will inform hypothesis generation and enable elucidation of mechanisms driving NP mobility in environmental media in the long term.