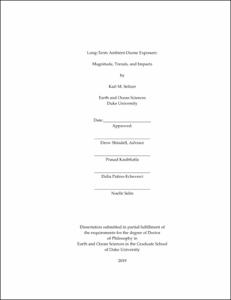 Long-term exposure to ambient ozone (O3) is associated with a variety of impacts, including adverse health effects in humans (U.S. EPA 2013) and reduced yields in commercial crops (Chameides et al., 1994; Mauzerall and Wang, 2001). Due to such impacts, efforts have been undertaken in recent decades to reduce ground-level O3 through public policy regulating the emission of anthropogenic precursor emissions, such as nitrogen oxides (NOx) and volatile organic compounds (VOCs). These efforts have been widely successful in reducing peak concentrations (Simon et al., 2015; Lefohn et al., 2017; Fleming et al., 2018), but impacts related to both human-health and crop yields nonetheless persist (Cohen et al., 2017; Seltzer et al., 2018; Zhang et al., 2018; Shindell et al., 2019). Of particular importance, the maginute and trend of impacts reported in the literature often feature substantial differences (Seltzer et al., 2018; Zhang et al., 2018; Stanaway et al., 2018). As climate change is anticipated to exacerbate O3 pollution (Leibensperger et al., 2008; Jacob and Winner 2009; Nolte et al., 2018) and the emission of O3 precursors are projected to vary dramatically in both direction and region over the coming decades (Rao et al., 2017), there is a growing need to better constrain the magnitude and trends of, as well as illuminate the reason for the persistent differences in, impacts attributable to long-term O3 exposure. Here, I used a variety of modeling methods to explore the strengths and weaknesses of standard methods that are frequently used to simulate impact metrics related to air quality, generate a measurement-based estimate of the magnitude of O3 exposure and subsequent impacts within several populous regions of the world, and use machine learning to predict the trends in O3 exposure and subsequent impacts within the United States over an extended period.

First, I use the NASA GISS ModelE2 and GEOS-Chem models, each setup in a number of configurations, to simulate the near-present chemistry of the atmosphere and predict a number of impact metrics. Results featured minor differences due to the model resolution, whereas model, meteorology, and emissions inventory each drove large variances. Surface metrics related to O3 were consistently high biased and capturing the change in O3 metrics over time proved difficult, demonstrating the need to evaluate particular modeling frameworks before O3 impacts are quantified. Oftentimes, the configuration that captured the change of a metric best over time differed from the configuration that captured the magnitude of the same metric best, illustrating the difficulty in skillfully simulating and evaluating predicted impacts.

Then, I use data solely from dense ground-based monitoring networks in the United States, Europe, and China for 2015 to estimate long-term O3 exposure and calculate premature respiratory mortality using exposure-response relationships derived from two separate analyses of the American Cancer Society Cancer Prevention Study-II (ACS CPS-II) cohort. Results show that estimated impacts were quite different when using the two cohort analyses, with the analysis using the older ACS CPS-II cohort yielding approximately 32%–50% lower health impacts. In addition, both sets of results are lower (∼20%–60%) on a region-by-region basis than analogous prior studies based solely on CTM predicted O3, due in large part to the fact that the latter tends to be high biased in estimating exposure. I also demonstrate how small biases in modeled results of long-term O3 exposure can amplify health impacts due to nonlinear exposure-response relationships.

Finally, I develop and apply artificial neural networks to empirically model long-term O3 exposure over the continental United States from 2000-2015, generating a 16-year measurement-based assessment of impacts on human-health and crop yields. I again find that the impacts are quite different when using the two ACS CPS-II cohort studies, but I notably also report that the results differ in their trends over the study period due to the seasons included in each averaging metric. When using the older averaging metric and concentration-response function, there was a ~18% decrease in normalized human-health impacts. In contrast, there was little change in the newer averaging metric between 2000-2015, which resulted in a ~5% increase in normalized human-health impacts. In both cases, an aging population structure played a substantial role in modulating these trends. All agriculture-weighted crop-loss metrics indicate yield improvements over this period, with reductions in the estimated national relative yield loss ranging from 1.7-1.9 % for maize, 5.1-7.1% for soybeans, and 2.7% for wheat. Overall, the results from this study illustrate how different conclusions regarding historical impacts can be made through the use of varying metrics.