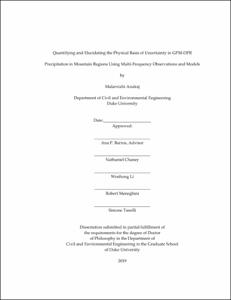 Quantitative precipitation estimation (QPE) in mountainous regions remains a challenging task owing to its high spatial and temporal variability. Satellite-based radar observations at high resolution have the best potential to capture the spatial patterns of precipitation, but there is high uncertainty in the interpretation of low-level measurements due to ground clutter effects, observing geometry, and sub-grid scale vertical and horizontal heterogeneity of precipitation systems that result from interactions among orographic clouds and propagating storm systems. In the high elevation tropics and in middle mountains everywhere, the landscape is often immersed in multi-layered cloud systems that modify precipitation significantly at low levels in a complex manner depending on time of day and location that is very different from the classical understanding of orographic precipitation enhancement with elevation, and are not easily parameterized or corrected for in QPE algorithms. The overall objective of this proposal is to characterize and elucidate the physical basis of uncertainty in Global Precipitation Measurement Mission (GPM) Dual-frequency Precipitation Radar (DPR) QPE in mountainous regions and develop an improved retrieval framework for orographic precipitation. The following science objectives will be addressed specifically: i) to characterize the dependencies among the spatial and temporal variability of errors in orographic QPE and associated hydrometeorological regimes; ii) to characterize the vertical structure of radar reflectivity associated with QPE retrieval error and establish a physics-based retrieval model; and iii) to develop an operational framework to integrate DPR observations and Numerical Weather Prediction (NWP) model toward improving the retrieval of orographic QPE. The research hypothesis are two folds: a) satellite QPE errors (false alarms, missed detections, underestimations and overestimations) exhibit a robust spatial and temporal organization that is explained by the spatial and temporal variability in the vertical microstructure of precipitation; and b) current satellite-based QPE algorithms fail because the vertical structure of precipitation cannot be detected. If the vertical structure of precipitation systems can be predicted, then the key microphysical processes can be modelled to improve QPE. The study will be conducted using observations from the Southern Appalachian Mountains (SAM) region including a high-density rain gauge network, Micro Rain Radars (MRR), and Parsivel disdrometers since the launch of GPM as well as Integrated Precipitation and Hydrology Experiment (IPHEx) 2014 data.

This research approach consists of integrating ground-based point measurements from long-term observation networks, fields campaign (IPHEx), multi-satellite data, and modeling studies to develop a physically-based retrieval framework for orographic precipitation. To characterize the dependencies among the spatial and temporal variability of errors in orographic QPE, GPM estimations were evaluated using the ground-based precipitation observations and investigated for the robust organization of uncertainty. The physics-based retrieval of near-surface rain-rates was demonstrated through explicit modeling of rain shaft microphysical processes constrained by GPM-DPR observations. Finally, a general data-driven operational framework was developed to improve the detection and to predict the vertical structure of precipitation systems by integrating GPM observations with NWP model simulations.