A Maladjusted King: Theological Resistance and Nonconformity in an American Prophet 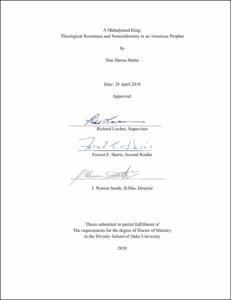 In response to Nassir Ghaemi, an academic psychiatrist who presumes a mental illness and genetic abnormality in Martin Luther King, Jr., this project contends that King was a decidedly maladjusted prophet who dramatized his resistance to the evil triumvirate of racism, materialism, and militarism pervasive in American public life. Using the sermonic trope, “Creative Maladjustment,” a theological reconstruction of King’s prophetic meliorism is sustained in order to reclaim his legacy from the facile memory of the nation. The essential writings, speeches, and sermons of the revered Baptist clergyman source the work, giving insight into his personal thoughts about the method he chose specifically for the purpose of pricking the conscience of the America during the Civil Rights Movement. Relevant commentary and critical analyses of scholars and historians also support the claim of this thesis, pointing to King’s well-reasoned moral stance against social iniquity. The project traces the roots of King’s resistance in the biblical witness of the Old Testament prophets, the religion of the black church in America, and his early humiliations borne of racial segregation. Attention is also given to his intellectual assent to the theory of civil disobedience and philosophy of nonviolence, with critical examination of his conversion to the same. Finally, the project delves into the maturing path of King’s resistance vis-à-vis the widening economic inequities observed across the national landscape and spreading global strife, which formed the basis of his “world house” doctrine. The implications of King’s legacy upon contemporary moral leaders are offered as concluding thoughts.