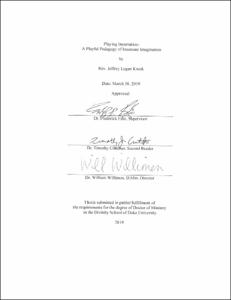 Playing Incarnation recognizes that the imagination is at the center holistic learning, and seeks to present a pedagogical model that focuses on inspiring and training the imagination through models of play. The model arose from an experience based model of learning implemented at Grace Lutheran Church of River Forest, Illinois, between 2012 and 2016; and the resulting research into neurological processes of learning. The research presented here begins with understanding how Christian education literature since the 1990’s has recognized and employed the imagination in education, finding Maria Harris’ model, presented in Teaching and Religious Imagination as foundational for a pedagogy of the imagination. Then, the imagination is explored through historical Christian thought to see how the imagination has been conceived by the western tradition of the church, drawing a theological picture of the divine imagination as a foundation for human imagination. This picture is influenced by Robin Stockitt’s Imagination and the Playfulness of God, and Jurgen Moltmann’s The Crucified God. The research then turns to understanding the neurological processes that form the imagination, following David Hogue’s Remembering the Future, Imagining the Past, and using the story of John, a student, as a case study. Finally, the structures and forms of play are explored, following Johan Huizinga’s Homo Ludens and Courtney Goto’s The Grace of Playing, and then using the faith education model from Grace Lutheran to understand how play structure triggers and trains the imagination in Christian forms of life. The result argues that faith education trains students’ imaginations to construe reality through the gospel, continually reinforced by experiences that practice Christian forms of life, resulting in forming a person as an icon of the Incarnation.