A New Class of Stochastic Volatility Models with Jumps: Theory and Estimation 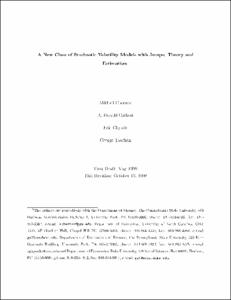 View / Download
488.1 Kb
Date
Authors
Chernov, Mikhail
Gallant, A Ronald
Ghysels, Eric
Tauchen, George
Repository Usage Stats
305
views
626
downloads
Abstract
The purpose of this paper is to propose a new class of jump diffusions which feature both stochastic volatility and random intensity jumps. Previous studies have focused primarily on pure jump processes with constant intensity and log-normal jumps or constant jump intensity combined with a one factor stochastic volatility model. We introduce several generalizations which can better accommodate several empirical features of returns data. In their most general form we introduce a class of processes which nests jump-diffusions previously considered in empirical work and includes the affine class of random intensity models studied by Bates (1998) and Duffie, Pan and Singleton (1998) but also allows for non-affine random intensity jump components. We attain the generality of our specification through a generic Levy process characterization of the jump component. The processes we introduce share the desirable feature with the affine class that they yield analytically tractable and explicit option pricing formula. The non-affine class of processes we study include specifications where the random intensity jump component depends on the size of the previous jump which represent an alternative to affine random intensity jump processes which feature correlation between the stochastic volatility and jump component. We also allow for and experiment with different empirical specifications of the jump size distributions. We use two types of data sets. One involves the S&P500 and the other comprises of 100 years of daily Dow Jones index. The former is a return series often used in the literature and allows us to compare our results with previous studies. The latter has the advantage to provide a long time series and enhances the possibility of estimating the jump component more precisely. The non-affine random intensity jump processes are more parsimonious than the affine class and appear to fit the data much better.
Type
Journal article
Subject
Jump-diffusions
random intensity jumps
stochastic volatiilty
Permalink
https://hdl.handle.net/10161/2028
Collections
More Info
Show full item record