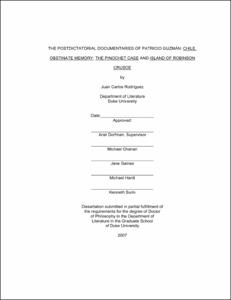 View / Download
2.2 Mb
Date
Author
Rodriguez, Juan Carlos
Advisors
Dorfman, Ariel
Chanan, Michael
Gaines, Jane
Hardt, Michael
Surin, Kenneth
Repository Usage Stats
714
views
7,428
downloads
Abstract
The aim of this investigation is to study the various cinematic and rhetorical strategies that Chilean filmmaker Patricio Guzmán uses to construct a complex image of the postdictatorial Chilean society. By analyzing three of his documentaries from the late 1990s and early 2000s (Chile, Obstinate Memory; The Pinochet Case and Island of Robinson Crusoe), I argue that Guzmán's cinematic images expose the challenges of constructing a collective memory of the 1973 coup in Chile and its aftermath. In an attempt to interrogate the social, political and economic dynamics of the Chilean transition to democracy that began in the year 1990, Guzmán's documentaries also explore the consequences of the Pinochet dictatorship (1973-1989) in the present. The historical conjuncture of postdictatorial Chile is connected to at least three geopolitical phenomenons: the Post-Cold War international arena formed after the dissolution of existent socialist regimes, the advent of neoliberalism as a transnational economic paradigm, and the struggle for global human rights. The documentaries of Patricio Guzmán are poetic responses to each of these geopolitical phenomenons that affect the constitution of the Chilean present.
Type
Dissertation
Department
Literature
Subject
patricio guzman
politics of memory
transition to democracy in Chile
globalization of justice
documentary
Robinson Crusoe
Permalink
https://hdl.handle.net/10161/203
Citation
Rodriguez, Juan Carlos (2007). The Post-dictatorial Documentaries of Patricio Guzmán: Chile, Obstinate Memory; The Pinochet Case and Island of Robinson Crusoe. Dissertation, Duke University. Retrieved from https://hdl.handle.net/10161/203.
Collections
More Info
Show full item record