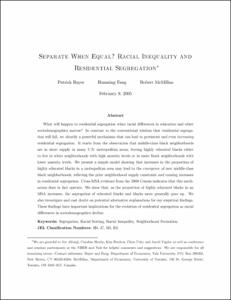 View / Download
1021.1 Kb
Date
Authors
Bayer, P
Fang, H
McMillan, R
Repository Usage Stats
320
views
699
downloads
Abstract
This paper sets out a new mechanism, involving the emergence of middle-class black neighborhoods, that can lead segregation in American cities to increase as racial inequality narrows. The formation of such neighborhoods requires a critical mass of highly educated blacks in the population and leads to an increase in segregation when those communities are attractive for blacks who otherwise would reside in middle-class white neighborhoods. To assess the empirical importance of this "neighborhood formation" mechanism, we propose a two-part research design. First, inequality and segregation should be negatively related in cross section for older blacks if our mechanism operates strongly, as we find using both the 1990 and 2000 Censuses. Second, a negative relationship should also be apparent over time, particularly for older blacks. Here, we show that increased educational attainment of blacks relative to whites in a city between 1990 and 2000 leads to a significant rise in segregation, especially for older blacks, and to a marked increase in the number of middle-class black communities. These findings draw attention to a negative feedback loop between racial inequality and segregation that has implications for the dynamics of both phenomena. © 2014 Elsevier Inc.
Type
Journal article
Permalink
https://hdl.handle.net/10161/2037
Published Version (Please cite this version)
10.1016/j.jue.2014.05.002
Publication Info
Bayer, P; Fang, H; & McMillan, R (2014). Separate when equal? Racial inequality and residential segregation. Journal of Urban Economics, 82. pp. 32-48. 10.1016/j.jue.2014.05.002. Retrieved from https://hdl.handle.net/10161/2037.
This is constructed from limited available data and may be imprecise. To cite this article, please review & use the official citation provided by the journal.
Collections
More Info
Show full item record Gilhuly Family Distinguished Professor in Economics
Bayer's research focuses on wide range of subjects including racial inequality and segregation, social interactions, housing markets, education, and criminal justice. His most recent work has been published in the Quarterly Journal of Economics, American Economic Review, Econometrica, and the Review of Financial Studies. He is currently working on projects that examine jury representation and its consequences, the intergenerational consequences of residential and school segregation, neighborhood