Stochastic Simulations for the Detection of Objects in Three Dimensional Volumes: Applications in Medical Imaging and Ocean Acoustics 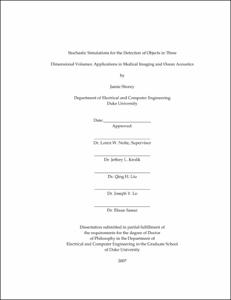 View / Download
6.7 Mb
Date
Author
Shorey, Jamie Margaret
Advisors
Nolte, Loren W
Krolik, Jeffery L.
Liu, Qing H.
Lo, Joseph Y.
Samei, Ehsan
Repository Usage Stats
799
views
779
downloads
Abstract
Given a known signal and perfect knowledge of the environment there exist few detection and estimation problems that cannot be solved. Detection performance is limited by uncertainty in the signal, an imperfect model, uncertainty in environmental parameters, or noise. Complex environments such as the ocean acoustic waveguide and the human anatomy are difficult to model exactly as they can differ, change with time, or are difficult to measure. We address the uncertainty in the model or parameters by incorporating their possibilities in our detection algorithm. Noise in the signal is not so easily dismissed and we set out to provide cases in which what is frequently termed a nuisance parameter might increase detection performance. If the signal and the noise component originate from the same system then it might be reasonable to assume that the noise contains information about the system as well. Because of the negative effects of ionizing radiation it is of interest to maximize the amount of diagnostic information obtained from a single exposure. Scattered radiation is typically considered image degrading noise. However it is also dependent on the structure of the medium and can be estimated using stochastic simulation. We describe a novel Bayesian approach to signal detection that increases performance by including some of the characteristics of the scattered signal. This dissertation examines medical imaging problems specific to mammography. In order to model environmental uncertainty we have written software to produce realistic voxel phantoms of the breast. The software includes a novel algorithm for producing three dimensional distributions of fat and glandular tissue as well as a stochastic ductal branching model. The image produced by a radiographic system cannot be determined analytically since the interactions of particles are a random process. We have developed a particle transport software package to model a complete radiographic system including a realistic x-ray spectrum model, an arbitrary voxel-based medium, and an accurate material library. Novel features include an efficient voxel ray tracing algorithm that reflects the true statistics of the system as well as the ability to produce separable images of scattered and direct radiation. Similarly, the ocean environment includes a high degree of uncertainty. A pressure wave propagating through a channel produces a measurable collection of multipath arrivals. By modeling changes in the pressure wave front we can estimate the expected pattern that appears at a given location. For this purpose we have created an ocean acoustic ray tracing code that produces time-domain multipath arrival patterns for arbitrary 3-dimensional environments. This iterative algorithm is based on a generalized recursive ray acoustics algorithm. To produce a significant gain in computation speed we model the ocean channel as a linear, time invariant system. It differs from other ocean propagation codes in that it uses time as the dependent variable and can compute sound pressure levels along a ray path effectively measuring the spatial impulse response of the ocean medium. This dissertation also investigates Bayesian approaches to source localization in a 3-D uncertain ocean environment. A time-domain-based optimal a posteriori probability bistatic source localization method is presented. This algorithm uses a collection of acoustic time arrival patterns that have been propagated through a 3-D acoustic model as the observable data. These replica patterns are collected for a possible range of unknown environmental parameters. Receiver operating characteristics for a bistatic detection problem are presented using both simulated and measured data.
Type
Dissertation
Department
Electrical and Computer Engineering
Subject
Monte Carlo
Detection Theory
Ocean Acoustics
Radiography
Particle Transport
Image Processing
Permalink
https://hdl.handle.net/10161/205
Citation
Shorey, Jamie Margaret (2007). Stochastic Simulations for the Detection of Objects in Three Dimensional Volumes: Applications in Medical Imaging and Ocean Acoustics. Dissertation, Duke University. Retrieved from https://hdl.handle.net/10161/205.
Collections
More Info
Show full item record