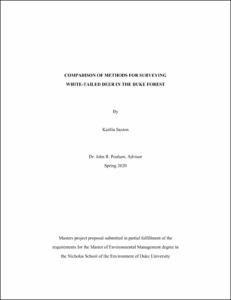 View / Download
2.5 Mb
Date
Author
Saxton, Kaitlin
Advisor
Poulsen, John
Repository Usage Stats
176
views
233
downloads
Abstract
White-tailed deer (Odocoileus virginianus) are one of the most recognizable and prevalent forest species in North America. Once near the brink of extirpation, their numbers have since rebounded into the millions due to their ability to adapt to fragmented and urbanized habitats coupled with the decline of their natural predators such as cougars and wolves. Acting as a keystone species in forest environments, their numbers can quickly exceed carrying capacity and lead to a cascade of ecological effects. Over-browsing, for example, results in the suppression or reduction of important plant species which can in turn negatively affect other organisms that depend on them to survive. In 2003, the Duke Forest began implementing a deer management program in response to a considerable browse-line throughout the forest. Each year, Duke Forest conducts a controlled hunt in three forest divisions followed by a spotlight survey to count deer and monitor the overall population trend and success of the program. Although past data have indicated a downward trend in deer numbers over the years, some skepticism remains as to whether the numbers estimated by spotlighting accurately reflect the density of deer in the forest. My project focused on designing and implementing several other common methods for surveying deer- camera traps, pellet counts, spotlighting, and distance sampling. More specifically, I sought to evaluate 1) the efficacy of camera trapping and pellet counts as alternative methods for monitoring, 2) whether distance sampling could improve the accuracy of the current spotlighting procedure, and 3) the relative effectiveness of all tested methods, including spotlighting, camera traps and pellet counts. This information was then used to inform the Duke Forest and recommend potential modifications to its deer management program. Of the three survey methods, camera traps were the most effective while pellet counts were the least effective. I failed to find enough pellet groups and spotlighting did not yield enough distance measurements to support distance sampling. This year’s spotlight deer count was the lowest in the program’s history. The camera traps captured thousands of observations of deer that were then used to calculate a density of 9.71 deer per square kilometer (25.15 deer per square mile) in the Korstian division which is considered medium density. Monitoring white-tailed deer is an important management tool in forested urban areas like the Duke Forest to prevent forest destruction and alteration and curb the risks of human-wildlife conflict that may arise from the overlap in deer and human habitats. The current spotlight method could be improved by adding more routes and survey nights to increase chances of finding deer, and, if enough observations are collected, distance sampling could be revisited. I recommend that the Duke Forest use distance sampling with camera traps to monitor their deer population and scale the methods used in this project up to include all divisions in the deer management program to get an overall density and examine environmental and seasonal factors that influence density and distribution.
Type
Master's project
Department
Nicholas School of the Environment and Earth Sciences
Subject
white-tailed deer
deer monitoring
duke forest
Permalink
https://hdl.handle.net/10161/20500
Citation
Saxton, Kaitlin (2020). Comparison of Methods for Surveying White-tailed Deer in the Duke Forest. Master's project, Duke University. Retrieved from https://hdl.handle.net/10161/20500.
Collections
More Info
Show full item record