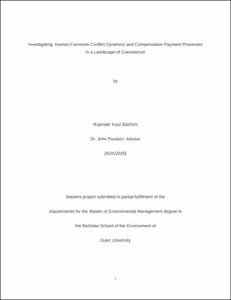 View / Download
1.8 Mb
Date
Author
Bakhshi, Rupinder Kaur
Advisor
Poulsen, John R.
Repository Usage Stats
258
views
371
downloads
Abstract
In human dominated landscapes of coexistence, large carnivores like tigers (Panthera tigris) and leopards (Panthera pardus) balance opportunities to secure prey, including livestock, against the risks of human-retaliation. The persistence of large carnivores requires that these species also be accommodated in habitats with high human and livestock use – and compensation programs are widely implemented to engender coexistence. I investigated the spatio-temporal dynamics of livestock depredation and the efficacy of the compensation payment processes around Corbett Tiger Reserve, India, where tigers and leopards kill between 700 and 1000 livestock each year. Multi-season occupancy models suggested that livestock depredation probabilities varied seasonally as a function of vegetation cover (both in forests and farmlands), with both tigers and leopards exploiting areas with higher human presence in seasons with more cover, revealing the dynamic nature of landscapes of coexistence. The probability of depredation was greatest in the monsoons, and approximately 50% lower in the winter and summers for tigers and marginally lower in winter and summers for leopards. The depredation-colonization probability peaked during summer – monsoon transition and stayed high through the monsoon, with the most significant spatial shifts in areas where vegetation increased the most, offering forage for livestock and cover for predators. Leopard depredation events were concentrated along the northern boundary of the study area, likely because tigers displaced them to the lower quality habitat, with higher ruggedness and fewer wild prey. The average compensation paid by the government for loss of livestock was US $211, approximately 30% of the value of a buffalo. Fund disbursal was greatly delayed, with claimants receiving payments 276-320 days after recording an event which leads me to conjecture that effective protection, cultural norms and beliefs – and a token interim compensation amount paid within 72 hours of an event by NGOs – may have cumulatively enabled the persistence of tigers and leopards, conflict notwithstanding. These findings will help prioritize management actions including refining processes to expedite compensation for the most vulnerable communities.
Type
Master's project
Department
Nicholas School of the Environment and Earth Sciences
Subject
Human Carnivore Conflict
Landscape of Coexistence
Corbett Tiger Reserve
Predation Risk Modelling
Multi-season occupancy models
Compensation schemes
Permalink
https://hdl.handle.net/10161/20515
Citation
Bakhshi, Rupinder Kaur (2020). Investigating Human-Carnivore Conflict Dynamics and Compensation Payment Processes in a Landscape of Coexistence. Master's project, Duke University. Retrieved from https://hdl.handle.net/10161/20515.
Collections
More Info
Show full item record