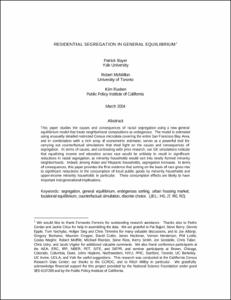 View / Download
178.6 Kb
Date
Authors
Bayer, Patrick
McMillan, Robert
Rueben, Kim
Repository Usage Stats
247
views
871
downloads
Abstract
This paper studies the causes and consequences of racial segregation using a new general equilibrium model that treats neighborhood compositions as endogenous. The model is estimated using unusually detailed restricted Census microdata covering the entire San Francisco Bay Area, and in combination with a rich array of econometric estimates, serves as a powerful tool for carrying out counterfactual simulations that shed light on the causes and consequences of segregation. In terms of causes, and contrasting with prior research, our GE simulations indicate that equalizing income and education across race would be unlikely to result in significant reductions in racial segregation, as minority households would sort into newly formed minority neighborhoods. Indeed, among Asian and Hispanic households, segregation increases. In terms of consequences, this paper provides the first evidence that sorting on the basis of race gives rise to significant reductions in the consumption of local public goods by minority households and upper-income minority households in particular. These consumption effects are likely to have important intergenerational implications.
Type
Journal article
Permalink
https://hdl.handle.net/10161/2061
Collections
More Info
Show full item record