The Organized Community: Visions of the New South in Black Atlanta, 1880-1922 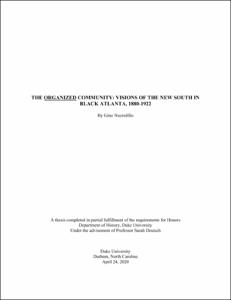 View / Download
12.1 Mb
Date
Author
Nuzzolillo, Gino
Advisor
Deutsch, Sarah
Repository Usage Stats
226
views
191
downloads
Abstract
At the turn of the 20th century, the city of Atlanta flaunted its status as capital of the New South – filled with civic pride, focused on commerce, and devoid of racial conflict. W.E.B. Du Bois commented that the nation “talked of [Atlanta’s] striving,” an image effectively projected by the city’s elite Black and white communities. For all of its New South aspirations, however, inequality along lines of race, class, gender, geography, and access to the Atlanta’s many resources defined daily life. In September 1906, a violent massacre – which left dozens of Black Atlantans dead at the hands of a white mob – tarnished Atlanta’s New South veneer and made clear the ways in which competing visions of a “New South city” were playing out in Atlanta’s streets, saloons, and neighborhoods. This thesis focuses on these many visions, primarily from the perspective of diverse community organizers, social workers, educators, and preachers who articulated their worldviews and put them into action. Using personal papers, maps, city ordinances, conference proceedings, and newspaper archives, this thesis tells the story of how Black Atlantans made claims upon, and asserted a right to, a rapidly changing Atlanta from 1880 to 1922.
Type
Honors thesis
Department
History
Subject
Atlanta
Cities
New South
Jim Crow
Geography
Community Organizing
Permalink
https://hdl.handle.net/10161/20633
Citation
Nuzzolillo, Gino (2020). The Organized Community: Visions of the New South in Black Atlanta, 1880-1922. Honors thesis, Duke University. Retrieved from https://hdl.handle.net/10161/20633.
Collections
More Info
Show full item record