Preparing for the Next Frontier: Considering a Modern Version of the Outer Space Treaty 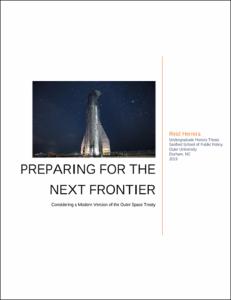 View / Download
489.2 Kb
Date
Author
Herrera, Cameron
Advisor
Philipsen, Dirk
Repository Usage Stats
143
views
81
downloads
Abstract
The international treaty system that governs activities in space was designed decades ago to prevent inappropriate actions by government actors. In recent years, this system has started to fall behind the growth in privately owned commercial space companies, which is projected to be worth trillions of dollars in the next 30 years. Currently, these companies are regulated by nation states under the broad authority of the Outer Space Treaty of 1962. This analysis proposes what a new version of this treaty might include 50 years later. New treaty language and text is generated based on the updates made to the London Convention, a treaty on dumping and ocean waste. This treaty addresses national regulations of commercial activities in a global common and was updated almost 25 years later to reflect modern conditions. The proposed treaty update incorporates precautionary principles and additional governance mechanisms for increased adaptability as private activity in space increases. This exercise illustrates one way of addressing concerns with private space entities and contributes to the broader discussion of good governance in space as commercial activity increases beyond Earth’s atmosphere.
Type
Honors thesis
Department
Sanford School of Public Policy/Public Policy Studies
Subject
Space Policy
Outer Space Treaty
International Relations
Space Commercialization
Space
Regulation
Permalink
https://hdl.handle.net/10161/20703
Citation
Herrera, Cameron (2019). Preparing for the Next Frontier: Considering a Modern Version of the Outer Space Treaty. Honors thesis, Duke University. Retrieved from https://hdl.handle.net/10161/20703.
Collections
More Info
Show full item record