The Effects of Heat Exposure on Human Mortality Throughout the United States. 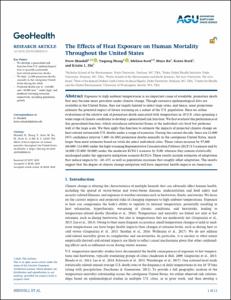 View / Download
7.7 Mb
Date
Authors
Shindell, Drew
Zhang, Yuqiang
Scott, Melissa
Ru, Muye
Stark, Krista
Ebi, Kristie L
Repository Usage Stats
18
views
388
downloads
Abstract
Exposure to high ambient temperatures is an important cause of avoidable, premature death that may become more prevalent under climate change. Though extensive epidemiological data are available in the United States, they are largely limited to select large cities, and hence, most projections estimate the potential impact of future warming on a subset of the U.S. population. Here we utilize evaluations of the relative risk of premature death associated with temperature in 10 U.S. cities spanning a wide range of climate conditions to develop a generalized risk function. We first evaluate the performance of this generalized function, which introduces substantial biases at the individual city level but performs well at the large scale. We then apply this function to estimate the impacts of projected climate change on heat-related nationwide U.S. deaths under a range of scenarios. During the current decade, there are 12,000 (95% confidence interval 7,400-16,500) premature deaths annually in the contiguous United States, much larger than most estimates based on totals for select individual cities. These values increase by 97,000 (60,000-134,000) under the high-warming Representative Concentration Pathway (RCP) 8.5 scenario and by 36,000 (22,000-50,000) under the moderate RCP4.5 scenario by 2100, whereas they remain statistically unchanged under the aggressive mitigation scenario RCP2.6. These results include estimates of adaptation that reduce impacts by ~40-45% as well as population increases that roughly offset adaptation. The results suggest that the degree of climate change mitigation will have important health impacts on Americans.
Type
Journal article
Subject
climate change
heat exposure
heat‐related mortality
Permalink
https://hdl.handle.net/10161/20722
Published Version (Please cite this version)
10.1029/2019gh000234
Publication Info
Shindell, Drew; Zhang, Yuqiang; Scott, Melissa; Ru, Muye; Stark, Krista; & Ebi, Kristie L (2020). The Effects of Heat Exposure on Human Mortality Throughout the United States. GeoHealth, 4(4). pp. e2019GH000234. 10.1029/2019gh000234. Retrieved from https://hdl.handle.net/10161/20722.
This is constructed from limited available data and may be imprecise. To cite this article, please review & use the official citation provided by the journal.
Collections
More Info
Show full item record Nicholas Distinguished Professor of Earth Science
Drew Shindell is Nicholas Professor of Earth Science at Duke University. From 1995 to 2014 he was at the NASA Goddard Institute for Space Studies in New York City and taught at Columbia University. He earned his Bachelor's at UC Berkeley and PhD at Stony Brook University, both in Physics. He studies climate change, air quality, and links between science and policy. He has been an author on &gt;250 peer-reviewed publications, received awards from Scientific American, NASA, the NSF and the EPA,