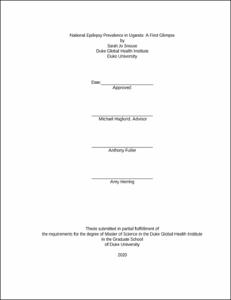 Background: In sub-Saharan Africa, epilepsy is ranked 14th for the highest disability burden. In Uganda, specifically, epilepsy has risen from 14th in 2007 to 10th for the highest burden of disability in 2017. Despite the significant disease burden of epilepsy in Uganda, there have been no national prevalence studies. Our first aim is to understand the overall epilepsy prevalence in Uganda. Additionally, we want to understand the impact that demographic and socio-economic factors have on epilepsy prevalence and whether these factors varied in their impact geographically.

Methods: Three hundred and thirty EAs were selected for this study, stratifications included urban/rural and the 10 sub-regions delineated in the DHS. In each EA, we randomly selected 30 households out of 100 (on average). All members of the household that consented, or assented, to be part of the study were included. We used a 13-item survey, broken into two levels, to screen for epilepsy and collected a variety of demographic and socio-economic factors from each participant. These factors were mapped to determine the impact, and significance, that each factor had on the geographic distribution of epilepsy prevalence in Uganda.

Results: The groups who had the highest epilepsy prevalence were under 35 years of age, had less than a primary level of education, lived in rural areas, had less than five household members, had access to a mobile phone and had less than two combined assets. The vast majority of positive screened participants were Christian and made less than 20,000 UGX a week.

Conclusions: From this study, we can see areas within Uganda where some geographic, demographic, and socio-economic factors have possibly played a role in epilepsy prevalence, as defined by our first screen. We can begin to understand these patterns and explore them further to determine the true nature of these factors and their relationship with epilepsy. There are current policy changes that could greatly improve access to care, stigma, and prevent further epilepsy cases by improving infrastructure in key areas.