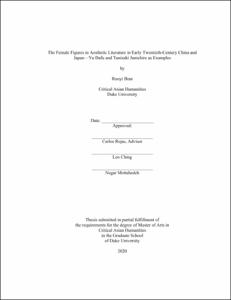 In this thesis, I mainly discussed the commonalities and differences between two representative authors of Chinese and Japanese aesthetic literature in the early 20th century: Yu Dafu and Tanizaki Junichiro, in terms of the female figures, from the perspective of feminism and interrelations between different genders. Also, I tried to look into the possible reasons for these similarities and differences and how we could understand them within the socio-historical background of East Asia in a shifting period. To achieve a deeper and more comprehensive discussion, I took the combined methods of socio-historical discussion and textual analysis in my thesis. The three chapters were based on the analysis and reference of historical materials, data, journals, original and translated literary texts, and academic research papers. Through the textual analysis of representative literary works of Yu and Tanizaki that engaged in aestheticism and a broad discussion of the women’s movements and political environments of Chinese and Japanese society from the late 19th century to early 20th century, I achieved the conclusion that while both revealing an imbalanced male-female relationship as a result of the traditional culture in East Asia, Yu expressed some different ideas on women’s status from Tanizaki. Affected by the relatively open and free political environment and the improved participation of women in public affairs, Yu revealed the possibility of the further improvement of women’s independence. While Tanizaki was far more devoted to the appreciation of women’s body as a fulfillment of male desires.