Environmental Surveillance for Enterovirus and Influenza A Virus Among Clinical Settings in Jakarta, Indonesia 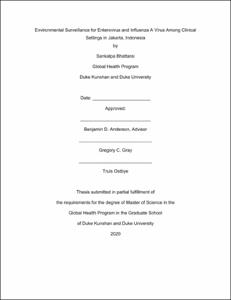 Introduction: Globally, acute respiratory infections (ARIs) are the leading cause of mortality and death among children below 5 years of age and adults of all ages. The disease burden due to ARIs is particularly high in low-to-middle income countries (LMICs) like Indonesia where the tropical climate, poverty-associated malnutrition, overcrowding, and air pollution increase the risk of infections from airborne pathogens. Although, the global burden of respiratory viruses such as respiratory syncytial virus, influenza, and enteroviruses has been broadly studied, there remains a lack of effective and continuous surveillance data to understand the full impact of respiratory viruses in Indonesia and other LMICs. Additionally, due to crowded conditions, inadequate ventilation, and poor sanitation, health care centers in LMICs may be hot spots for rapid transmission and exchange of respiratory viruses. In such settings, bioaerosol sampling, which is a low cost, rapid and noninvasive method for surveillance of respiratory pathogens, has been shown to be an effective tool for surveillance of respiratory viruses. Therefore, in this study, we conducted surveillance for influenza A virus and enterovirus using bioaerosol and surface swab sampling in a clinical setting located in Jakarta, Indonesia.

Methods: In this study, we performed bioaerosol sampling and surface swab sampling for 8 days during August 2019, inside a tertiary care hospital located in Eastern Jakarta, Indonesia. The sampling sites included a common waiting room, a triage room, and a physician’s room with clinical staff and patients present during sample collection. We used a SKC BioSampler with a BioLite Air Sampling Pump (run for 60 min at 5 L/min) with polytetrafluoroethylene Teflon filter cassettes and sterile nylon-flocked swabs to take surface swab samples. Temperature and humidity data were also collected at each sampling site concurrently. Viral RNA was extracted from bioaerosol samples and surface swabs using the QIAamp Viral RNA Mini Kit. Extracted Viral RNA was assessed with real-time RT-PCR (qRT-PCR) assays using the SuperScript® III Platinum One-Step qRT-PCR System with Platinum® Taq DNA Polymerase for the detection of influenza A and human enterovirus.