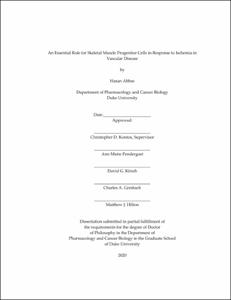 Peripheral artery disease (PAD) is nearly as common as coronary artery disease, but few effective treatments exist, and it is associated with significant morbidity and mortality. Although PAD studies have focused on the vascular response to ischemia, studies from our lab indicate that skeletal muscle cells, particularly Pax7-expressing muscle progenitor cells (MPCs), also known as satellite cells, may play a critically important role in determining the phenotypic manifestation of PAD. Here, we demonstrate that genetic ablation of satellite cells in a murine model of PAD resulted in a complete absence of normal muscle regeneration following ischemic injury, despite a lack of morphological or physiological changes in resting muscle. Compared to ischemic muscle of control mice (Pax7WT), the ischemic limb of Pax7-deficient mice (Pax7∆) was unable to generate significant force 7- or 28-days after hind limb ischemia (HLI) in ex vivo force measurement studies. A dramatic increase in adipose infiltration was observed 28 days after HLI in Pax7∆ mice, which replaced functional muscle, a phenotype seen in PAD patients with severe disease. To investigate the mechanism of these adipogenic changes, we first investigated whether a pool of progenitor cells known as fibro-adipogenic progenitors (FAPs) was upregulated and demonstrated an increase in the expression of their canonical marker PDGFRα in Pax7∆ mice. Inhibition of FAPs using the drug batimastat resulted in a decrease in muscle adipose tissue and a corresponding increase in fibrosis. MPCs cultured from mouse muscle tissue failed to form myotubes in vitro following depletion of satellite cells in vivo, and they displayed an increased propensity to differentiate into fat in adipogenic medium. Importantly, this phenotype was recapitulated in patients with critical limb ischemia (CLI), the most severe form of PAD. Skeletal muscle samples from CLI patients demonstrated an increase in adipose deposition in more ischemic regions of muscle, which corresponded with a decrease in the number of satellite cells in those regions. Collectively, these data demonstrate that Pax7+ MPCs are required for normal muscle regeneration after ischemic injury, and they suggest that targeting muscle regeneration may be an important therapeutic approach to prevent muscle degeneration in PAD. Future studies will focus on the role of other supporting cells (such as pericytes) and the cross-talk between FAPs and satellite cells in ischemic muscle regeneration.