Estrogen’s Impact on the Specialized Transcriptome, Brain, and Vocal Learning Behavior of a Sexually Dimorphic Songbird 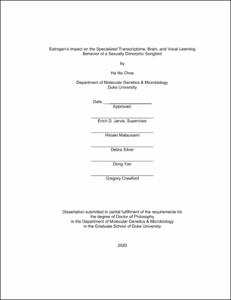 The song system of the zebra finch (Taeniopygia guttata) is highly sexually dimorphic, where only males develop the neural structures necessary to learn and produce learned vocalizations in adulthood. During early development, both males and females begin to develop their song system in a monomorphic manner, which diverges shortly after the onset of a critical sensory learning phase and results in reduced cell survival and proliferation in females, and accelerated cell proliferation in males. Estrogen has long been known to be involved in coordinating sexual development of the perinatal brain and nestling female zebra finches treated with estrogen do not exhibit this female-specific atrophy of the song system. How estrogen influences the development of the song system, and what it is doing at the molecular level has not been examined utilizing current generation sequencing technology.

In this dissertation, I tested whether estrogen manipulation impacts the transcriptomic profiles of telencephalic song learning nuclei in males and females. I treated animals with either vehicle, exemestane (an estrogen synthesis inhibitor), or 17-β-estradiol from the moment of hatching until time of sacrifice. I collected the song learning nuclei and their surrounding brain regions during the onset of sensory motor learning for transcriptomic analysis or during adulthood after collecting behavior. I found that of the 4 telencephalic song nuclei examined during the onset of the sensorimotor learning period at post hatch day 30, Area X was the most sexually dimorphic and the most impacted by estrogen administration. HVC was less sexually dimorphic and less impacted by estrogen manipulation. RA and LMAN had limited sexually dimorphic features, with little impact on their transcriptomes with estrogen manipulation. Additionally, I found that chronic estrogen depletion in males delayed male specific plumage development and resulted in impaired song learning. This supports the notion that while estrogen is sufficient in preventing atrophy of the song system in female zebra finches, it is not necessary for the gross development in males and may instead refine normal song development.